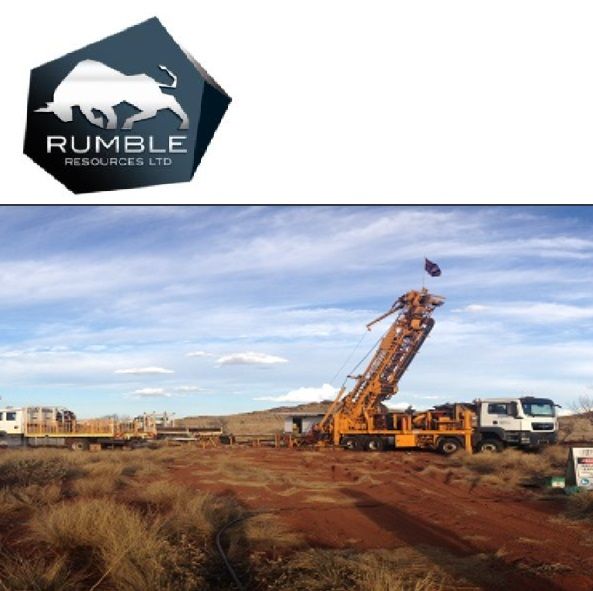 FRA:20Z) is pleased to announce it has exercised the option to acquire a 75% in E69/3464 on renegotiated terms with Fossil Prospecting Pty Ltd (a wholly owned subsidiary of ASX Listed Zenith Minerals Ltd (

Rumble's Managing Director, Mr Shane Sikora, said: "Rumble is pleased to exercise the option to acquire 75% of E69/3464 on renegotiated terms that were fair and reasonable for both parties. We look forward to continuing our strong relationship with Zenith Minerals as JV partners and Rumble shareholders as we progress the project.

"Rumble now has a clearer understanding of the system and targets and believes the projects prospectivity has been significantly increased. Rumble's new target is large tonnage, flat lying, near surface (amenable to open cut mining), sandstone hosted Zn-Pb deposits which are typically metallurgical simple, making them high value propositions.

"As the sandstone unit hasn't previously been recognised and targeted, on the western margin of the project over 13km of shallow Zn-Pb mineralised sandstone units in two sub basins (see image 2 in link below) has been identified with no historic drilling where the units come to surface, making these first order drill target areas.

"Rumble will fast track exploration utilising a seismic geophysical survey that can potentially map the sandstone unit to surface and provide a valuable drill targeting tool. This survey will be followed by a wide spaced shallow vertical RC drilling program to test the two basins and the Zn-Pb bearing sandstone units".

The Earaheedy project is located approximately 110km north of Wiluna, Western Australia. Rumble now owns a 75% interest in E69/3464. Based on the newly identified mineralisation style, Rumble has applied for three (100% RTR) contiguous exploration licence applications ELA69/3743, ELA69/3745 and ELA69/3746, that cover the inferred unconformity contact between the overlying Frere Iron Formation and underlying Yelma Formation of the Palaeoproterozoic Earaheedy Basin - See image 2 and 3 in link below.

The new style of Zn-Pb mineralisation has been delineated on the unconformity contact between the overlying Frere Iron Formation and underlying Navajoh Dolomite and shale of the Yelma Formation. Both formations are part of the lower units of the Palaeoproterozoic Earaheedy Basin. Drilling intercepted a flat lying porous sandstone to grit unit that has been interpreted to be the basal unit of the Frere Iron formation that lies unconformably over the Yelma Formation. Sphalerite, galena and pyrite have replaced the matrix (pore) space within the porous sandstone grit host forming laterally extensive sulphide layers.

The flat lying Zn Pb bearing sandstone unit with over 13km of strike potential is a high tonnage target based on the average 7.5deg dip to the northeast. Image 2 highlights a target tonnage using the following assumptions:

The project has the potential for >12 million tonnes (plus metal) per 1km strike. Note over 13km of prospective strike has been identified.

The larger sub basin (Main Sandstone Sub Basin) (See image 2 and 3) has an area of 8km by 2.5km and is open to the southeast. Within the Main Sandstone Sub Basin fifteen (15) diamond core and RC drill holes have intercepted the Zn Pb bearing sandstone unit. Over half of the drill holes did not pass through the sandstone and ended in mineralisation. Significant drill hole intercepts include:

Over 13km of prospective strike (see image 2) of potential shallow Zn-Pb mineralized sandstone has been identified where the unconformity comes to surface. The prospective strike is completely open. All previous exploration (drill holes) has focused on MVT (Mississippi Valley Type) Zn-Pb mineralisation hosted within the Navajoh Dolomite (upper unit of the Yelma Formation). No drill hole has tested the up-dip to surface expression of the Zn-Pb bearing sandstone unit within the sub basins.

The source of the Zn-Pb in the sandstone is from the underlying eroded dolomite which hosts the Zn Pb MVT mineralisation. With both sub basins, the Zn Pb (MVT) dolomite is completely eroded towards the southwest. Metal zonation is evident with Pb (Galena) increasing substantially (Zn:Pb ratio decreasing) towards the southwest. Mineralisation is sphalerite, galena and pyrite. The sandstone unconformity is often cavitated and fill of voids with large volumes of high salinity water present.

A series of diagrammatic longitudinal sections of the Main Sandstone Sub Basin (images 3 and 4) highlights the approximate depth and location of the prospective Zn Pb bearing sandstone as it nears the surface (up dip). Image 3 highlights Zn + Pb anomalism from previous soil sampling (partial leach geochemistry - iron) located close to the unconformity as it surfaces under shallow cover.

- Passive seismic traverses are planned in November 2019 to cover the Main and Northwest Sandstone Sub Basins to aid in understanding and locating the highly prospective sandstone unconformity as it comes to surface.

- Shallow vertical RC drilling is planned in December 2019 to test the up-dip position of the Zn Pb bearing sandstone unit. It is planned to drill on approximate 500m centres covering both the Main and Northwest Sandstone Sub Basins. 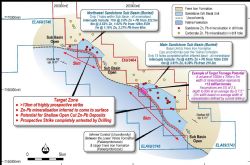 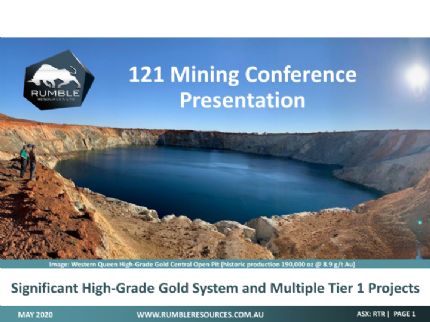