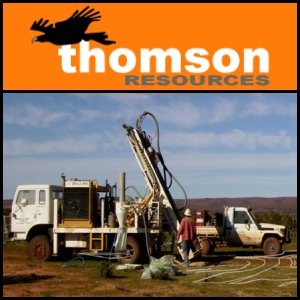 At Bygoo the target was a newly discovered second greisen that runs perpendicular and at a shallower depth than the Main Zone drilled from 2015 to 2018. The two greisens intersect under the old Dumbrells shallow pit. The new "Dumbrells" greisen was delineated for more than 200m in length with ten holes for 762m and is open in both directions. The average intercept (calculated from 8 holes) was 11m at 0.4% Sn from 29m depth (see Thomson's ASX release of 7 January 2019).

Regionally, a new area of tin lodes at Big Bygoo was drilled with fifteen holes for 1036m - all four lodes drilled returned significant tin values, with a standout intercept of 24m at 0.6% Sn from a depth of 46m at the Titanic lode (see Thomson's ASX release of 7 January 2019).

New modelling showed the potential for both the Main and Dumbrells Zones to extend significantly along strike and down dip. In particular the N-S Dumbrells zone may extend through the Smiths old tin workings towards the Big Bygoo area 1.5km to the south, an area with little or no previous testing.

The Bygoo Farm in with BeiSur OstBarat Agency Ltd. expired on June 30th, 2019, meaning that the project reverts 100% to Thomson Resources. Negotiations are continuing over possible future participation of BeiSur in the Bygoo Project.

Thomson applied for EPM application 27186 which covers 72 square km in the Chillagoe area of North Queensland. The area is prospective for intrusion-related gold and the EPM features several prospects with strong surface gold and limited or no drilling.

Thomson holds 7 Exploration Licenses in NSW covering 676 square kilometres, after three ELs were relinquished during the quarter. A joint venture arrangement is in place over Havilah (EL 7391) with Silver Mines Ltd (

ASX:SVL). Thomson also holds EPM 27186 in Queensland as described above.