ASX:LKE) announced today high-grade final results from its 100% owned Cauchari Lithium Brine Project which confirm a significant discovery, interpreted as an extension to the world-class neighbouring project moving to production next year in the heart of the Lithium Triangle.

NYSE:LAC) which has a Measured and Indicated Resource of 17.9Mt LCE at 581 mg/L lithium (Apr 2019 NI 43-101). Lake's results lead to an interpretation of an extension of the adjoining project, with a marginal difference in grade, in the same basin (refer table below with the range of lithium grades and intervals).

Brines were intersected over 506m from 102m to 608m. Lower flow rates below 465m depth led to the hole being completed at 608m. A test sample of almost the entire hole averaged 444 mg/L lithium over 476m from 132m down to 608m. The drillhole has had slotted casing installed to allow for future testing.

Lake's Managing Director Steve Promnitz commented: "Independent assays and detailed sampling from Lake's Cauchari drilling has conclusively demonstrated it is an extension to the adjoining large resources - a project with the world's largest defined lithium brine resource. We are in the same basin and confident of growing the project with further drilling given we have a 7km strip along the salt lake. The approach to drill brines under alluvial cover around a salt lake has been proven and we aim to repeat that approach at our Olaroz project.

"This boosts confidence in the planned drilling being prepared at our 100% owned Olaroz Lithium Brine Project, with the goal of extending the brines that hosts current production by Orocobre (

ASX:ORE). Olaroz has the potential to be another standalone project, with Lake aiming to have three defined lithium brine projects in the heart of the Lithium Triangle from where low-cost lithium production comes. Significantly for investors, major Chinese producer Ganfeng Lithium invested a combined US$397 million to acquire a 50% stake in its Cauchari project, demonstrating the value of such large, low cost lithium brine producing projects. Our discussions continue with potential development partners for our 100% owned Kachi Lithium Brine Project where a pre-feasibility study is underway together with a pilot plant."

"Meanwhile, analysts including the Australian government forecaster, Benchmark Mineral Intelligence and Wood Mackenzie are all pointing to a looming supply deficit for lithium by the early to mid-2020s, while automakers continue to ramp up planned electric vehicle output. Investors that focus on the near-term market opportunity will be rewarded, particularly those projects that can benefit from the world's lowest cost lithium production."

Lake Resources NL (ASX:LKE)  (OTCMKTS:LLKKF) is a clean lithium developer utilising clean, direct extraction technology for the development of sustainable, high purity lithium from its flagship Kachi Project, as well as three other lithium brine projects in Argentina. The projects are in a prime location within the Lithium Triangle, where 40% of the world's lithium is produced at the lowest cost.

This method will enable Lake Resources to be an efficient, responsibly-sourced, environmentally friendly and cost competitive supplier of high-purity lithium, which is readily scalable, and in demand from Tier 1 electric vehicle makers and battery makers. 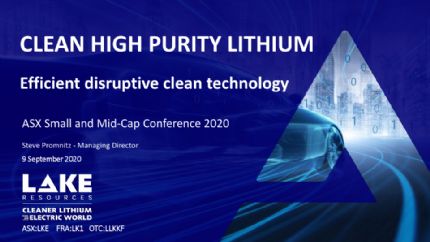