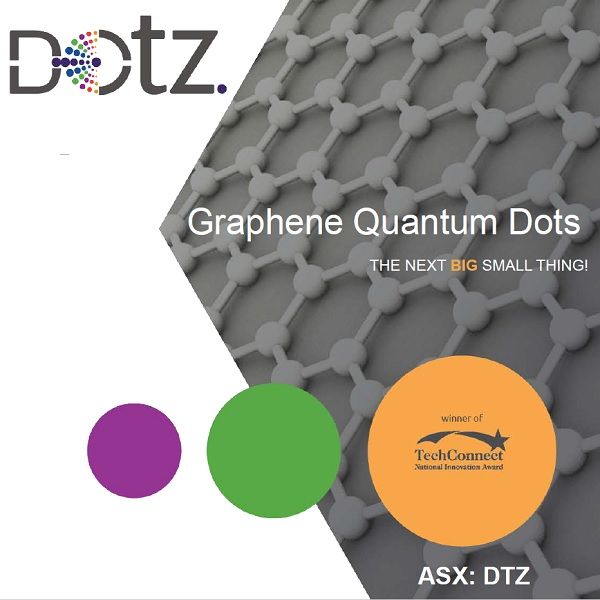 ASX:DTZ) ("Dotz Nano" or the "Company") has successfully completed a Proof of Concept research study into the use of Graphene Quantum Dots (GQDs) in flash memory with the Kyung Hee University in South Korea. Dotz Nano is in advanced negotiations to sign a full licensing agreement with Kyung Hee University. The present intention is for the agreement to also include an optional exclusive Licensing Rights Agreement for the development and commercialisation of GQD Flash Memory devices.

- The collaborative research was performed together with the Department of Applied Physics, College of Applied Science at Kyung Hee University in South Korea

Initial research conducted by Kyung Hee University and Samsung Electronics Co (KRX:005930) in 2014[1] into the application of GQDs in flash memory was successful, but has not been taken further prior to now. With the introduction of Dotz Nano's GQDs from coal sources, the program was revisited and replicated with Dotz Nano coal based GQDs. In addition to their fluorescent characteristics, and the attractiveness of GQDs for next-generation electronics and photonics, due to their unique electronic conductivity properties, the low cost of Dotz Nano's GQDs allows for a more economically feasible device.

The Proof of Concept research was successful in proving that Dotz Nano's GQDs can be used in Flash Memory devices. In the Proof of Concept research, graphene quantum dots of three different sizes (6, 12, and 27 nm diameters) were prepared between silicon dioxide layers. The study found memory attributes in the dots with the memory properties differing depending on the dots sizes. For instance, while the 12-nm dots exhibit the highest program speed, the 27-nm dots exhibit the highest erase speed, as well as the highest stability. As a flash memory device in their early stages of development, the graphene quantum dot memories demonstrate a promising performance, with an electron density comparable to that of memory devices based on semiconductor and metal nanocrystals.

Today's commercial flash memories usually store data as an electric charge in polysilicon layers. Because polysilicon is a single continuous material, defects in the material can interfere with the desired charge movement, which can limit data retention and density. The continued miniaturisation of electronics creates challenges for standard flash memory due to possible defects in the material.

To overcome this problem researchers have been working on storing charge in discrete charge traps, such as nanocrystals, or GQDs instead of polysilicon layers. Since discrete charge trap materials have the advantage of preventing unwanted charge movement as a result of their lower sensitivity to local defects, they offer the potential for high-density flash memories.

Commenting on the announcement, Dotz Nano's CEO Dr Moti Gross, stated: "The use of our GQDs in a variety of sophisticated applications is part of our corporate business strategy. Today, Dotz Nano is concentrating on establishing our immediate revenue base and these external studies and research that we are funding will give Dotz Nano a future boost, where we can achieve a higher value for our shareholders. This specific study, which focuses on the Non-Quantum Yield application will put Dotz Nano in a very interesting position in the memory storage market, which needs more and more stable data memory".

"The successful completion of the Proof of Concept stage in Flash Memory devices, is just proof, of the myriad of possibilities and uses of GQDs. Dotz Nano will continue to address new applications, thus extending the uses of GQDs in a multitude of applications for future business ventures".

Dotz Nano Limited (ASX:DTZ) is a technology company focusing on the development, manufacture and Graphene Quantum Dots (GQDs). Its vision is to be the premier producer of GQDs by producing and supplying high quality GQDs for use in various applications including medical imaging, sensing, consumer electronics, energy storage, solar cells and computer storage.

To learn more about Dotz Nano please view the website and our corporate video via the following link: www.dotznano.com