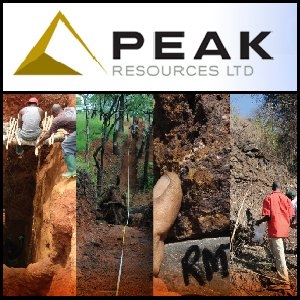 OTCMKTS:PKRLY) is pleased to advise the appointment of Mr. Darren Townsend to the role of Managing Director effective 3rd February 2014.

Mr. Townsend has a Bachelor of Engineering Degree (Mining Engineering - Honours) from the West Australian School of Mines as well as an Executive Masters of Business Administration from Curtin University and has extensive project development, operational and corporate experience predominately in strategic metals.

From 1999 to 2004 Darren was responsible as site General Manager for the successful development and expansion of mining and processing operations of what was at the time the world's largest Tantalum Mine at Wodgina in Western Australia.

Darren also has over 7 year's corporate experience at Managing Director and Chairman level in both ASX and TSXV listed Companies.

Mr. Townsend's most recent executive role was as President and Chief Executive Officer of TSXV listed Pacific Wildcat Resources Corp where he has led the Company's activities since 2008. During this period he has overseen the development of a Tantalum Mine in Mozambique and the acquisition and evaluation of the Mrima Hill Rare Earth and Niobium Project in Kenya.

Peak Resources' Executive Chairman Mr. Alastair Hunter commented "We are very pleased to have attracted an executive of the calibre of Mr. Townsend. His extensive understanding of the rare earth industry, his East African experience and previous corporate roles will be of immense value as Peak moves forward with the development of the Ngualla Rare Earth Project."