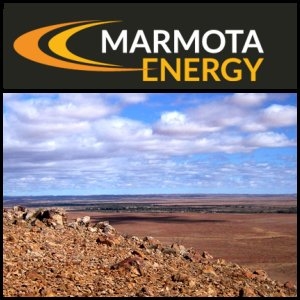 ASX:MEU) is pleased to announce that high uranium grades under the classification of "true grades" have been returned from the laboratory analysis of cored drill holes taken at the flagship Saffron deposit within the Company's Junction Dam project in South Australia and located west of Broken Hill, abutting the border with NSW.

- Laboratory assays confirm true high grades of uranium of up to 8,143 ppm U3O8 at Marmota's SA Junction Dam project near NSW border
- Positive disequilibrium factor ranging between 1.22 and 2.25 underpins an upwards resource recalculation of the Saffron deposit, and resource expansion at the adjoining Bridget and Yolanda prospects
- Outstanding results are from cored drill holes at Junction Dam's flagship Saffron deposit - and are significantly higher than earlier radiometric logging results from same holes
- Further substantiates Junction Dam's uranium mineralisation as highly significant and comparable with mineable grades for nearby Honeymoon and Beverley U mines

High grades of up to 8,143 ppm U3O8 were returned from assays of the Saffron cores, taken during the final stages of Marmota's 2011 drilling campaign (Table 1) at Junction Dam. This campaign included sonic drilling across the Saffron deposit to obtain high quality mineralised samples for laboratory assay and further mineralogical testing.

The core assay results confirm significantly higher and true grades of uranium within the project compared to conventional industry practice of downhole radiometric logging. The Company considers the maiden round of assay results to be a significant outcome.

The assay grades are comparable to the uranium grades underpinning the recent start to mining at the new Honeymoon in-situ leaching uranium mine, just 10 kilometres to the west of Junction Dam. Both projects are contained within the same highly prospective Yarramba Palaeochannel (See Figure 1 in Full Announcement).

The assayed grades are also near the horizon for those driving production at the Beverley mine further to the northwest of Honeymoon and Junction Dam. The disequilibrium factors reported have potential to increase the magnitude of the resource at Saffron, as the initial resource estimate to date of 3.33 million pounds (1,510 tonnes of U3O8 contained within 4.36 million tonnes of mineralisation announced in November last year), was based only on the data from downhole radiometric logging.

Saffron is one of four prospects identified to date by Marmota at Junction Dam. The Company has also expanded its exploration target to 15-20Mt U3O8 at a grade of 0.03-0.05% uranium~. Its Phase 3 drilling campaign conducted over 2011 at Junction Dam defined a zone of uranium mineralisation extending for approximately 15km, encompassing Yolanda, Saffron and Bridget.

Further drilling in 2012 to expand resource
Further work is now underway to define areas for drill testing in 2012, including resource expansion on the Yolanda prospect immediately adjoining the Saffron deposit to the south.

High resolution ground electromagnetic surveys were recently completed over the Yolanda prospect corresponding to mineralised drill holes completed in 2011. Those survey results displayed a strong contrast between potential mineralised palaeochannel sediments and the surrounding rocks as was demonstrated at Saffron and Bridget. This data will now be used to define new 2012 drill targets.

A technical summary of the laboratory assays for Saffron and associated explanatory information is contained in the link below to the full tables and charts.

JUNCTION DAM
Technical summary of laboratory assays from Saffron deposit core samples
Results from assays of core samples extracted from the Saffron deposit at Junction Dam, indicate that radiometric logging at Saffron deposit and the adjoining Bridget prospect significantly understates the grades by a factor ranging between 1.22 and 2.25, signifying that the deposit is in positive disequilibrium*.

As an example, positive disequilibrium can be observed in Hole SASO005 where mineralisation was intersected returning an assay result of 2007.7 ppm U3O8 in comparison to the downhole gamma result of 892.7 ppm eU3O8. The difference in uranium content from the assay and the downhole gamma probe results in a positive in-balance of 125%, or a disequilibrium factor of 2.25. The results of the disequilibrium study conclude that, overall, positive disequilibrium exists in the Saffron deposit and that downhole radiometric logging significantly understates the actual uranium grade. Disequilibrium is not uncommon in uranium deposits hosted by permeable sandstones (particularly roll front type deposits) such as Saffron, due to groundwaters flowing through the mineralisation.

For the Full Announcement including tables, please visit:
http://abnnewswire.net/lnk/OL3O2XI7