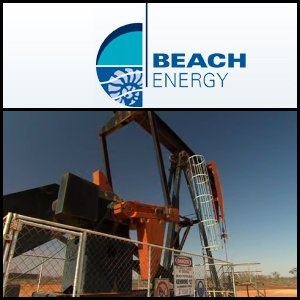 PINK:BEPTF) has released the following monthly drilling report for December 2011.

Two operated exploration wells were drilled in the Cooper-Eromanga Basin during the report period.

The Baird-1 exploration well (PEL 106B, Beach 50%) was drilled to further assess the distribution of stratigraphically trapped gas on the Patchawarra Trough margin, and to gather additional data on a potential deep coal gas play. The well did not intersect conventional gas, but has been cased and suspended for evaluation of a prospective deep coal interval. A further four wells are planned in this campaign.

Yaroomba-1 (ATP 269P, Beach 46.95%) was the first exploration well in a minimum five well campaign in multiple permits that will test several oil and/or gas opportunities along the southern and eastern margins of the Cooper-Eromanga. Yaroomba-1 was plugged and abandoned after failing to intersect commercial hydrocarbons.

Two wells were drilled within the PEL 104/PRL 15 permits (Beach 40%) during the month. The first was an exploration well, Jaguar-1, which failed to intersect reservoir within the target mid-Birkhead interval and was subsequently plugged and abandoned. The second well, Growler-11, successfully intersected the mid-Birkhead reservoir and further extended the field approximately 600 metres to the south-east of Growler-1. Growler-11 is currently being cased and will be duly completed as a Birkhead oil producer.

A workover rig is mobilising to Encounter-1 in PEL 218 (Beach 100%) to prepare the well for fracture stimulation activities which are now expected to occur in mid-late January.

The Ensign 16 drilling rig is expected to spud Moonta-1 (PEL 218, Beach 100%) in mid January. This well will be the first in a campaign of at least five wells designed to delineate the resource potential of the basin centred and shale gas volumes of the Nappamerri Trough.

Four gas development wells were drilled during the month; Moomba-191 and Andree-4 in South Australia (Beach 20.21%), and Roti-4 and Galex-3 in Queensland (Beach 23.20%). All four wells were cased and suspended as future gas producers. In addition, Moomba-191 was deepened to selectively core intervals within the Roseneath-Epsilon-Murteree (REM) formations in order to further evaluate the shale gas potential of this interval in the Moomba Field area.

The rigs have subsequently moved and are currently drilling ahead at the Merrimelia-62 (Beach 20.21%) and rigging up at Durham Downs-5 (Beach 23.20%) gas development sites.

El Salmiya-1 (Beach 22%) encountered hole problems after obtaining a five metre core in the Bahariya Formation at 3958 metres. The well is currently being side-tracked to drill to the deeper Kharita Formation; El Salmiya-1 ST1 kicked off in the Abu Roash "E" and is currently drilling ahead at 3799 metres.

Al Jahraa-1, located about 20 kilometres west of the Al Ahmadi-1 and ZZ-4 wells, reached total depth in the Kharita Formation at 3700 metres. A program of flow testing is underway to evaluate strong hydrocarbon shows at several horizons in the well. Al Jahraa-1 is the fourth of a six-well program within the Abu Sennan Concession.