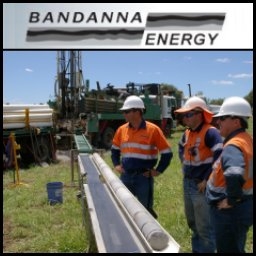 ASX:BND) is pleased to announce that it has reached a commercial agreement for a rail solution for its Golden Triangle projects. The Wiggins Island Rail Project (WIRP) Agreement was reached by Bandanna Energy and other Stage 1 WICET shippers with QR Network Pty Ltd, a wholly owned subsidiary of QR National (

The WIRP agreement will see the construction of necessary rail infrastructure to ensure the rail connections of source mines of Stage 1 Wiggins Island Coal Export Terminal (WICET) shippers to the new port facilities to be constructed at Gladstone.

Under the WIRP agreement the rail solution will be synchronised with completion of WICET Stage 1 in order that first coal is at port ready for export by mid 2014.

Bandanna Energy Managing Director Dr Ray Shaw said the WIRP agreement was a very significant milestone both for Bandanna and other Stage 1 shippers of WICET. "QRN's expenditure of A$900+ million for infrastructure is a very strong vote of confidence in WICET and the shipper's source mines. With this agreement a key piece of the coal supply chain for Bandanna's Golden Triangle projects has now been resolved." Dr Shaw said.

The Wiggins Island Rail Project, with an estimated cost of $900+ million, will be one of the largest rail expansions in Australia.

The project supports the initial 27 million tonnes per annum of coal to the proposed Wiggins Island Coal Export Terminal at Gladstone.

This represents a 30% increase in the tonnes transported from the Southern Bowen Basin coal region.

The project includes the construction of a 13 kilometre balloon loop near Gladstone, upgrades to sections of the North Coast Line, the Moura System and the Bauhinia branch line, as well as duplication of sections of track along the Blackwater System.

Upon completion, the mainline Blackwater System, which services the southern Bowen Basin where Bandanna has most of its tenements, will be fully duplicated.

The arrangements provide for commercial returns on the rail infrastructure and are subject to the approval of the Queensland Competition Authority and certain other conditions precedent.

WIRP will align with the time frames for the WICET Stage 1 build and the development of related mining projects. Construction is due to begin in early 2012, with completion of initial works aligning with port capacity becoming available around mid 2014, and all remaining works being completed by March 2015.

Bandanna is a shareholder in WICET which together with 7 other stakeholders is an industry led consortium spearheading the expansion of the existing 70 Mtpa export capacity of the Gladstone Port.

Bandanna has been allocated a 4 Mtpa allocation in Stage 1 of Wiggins Island.