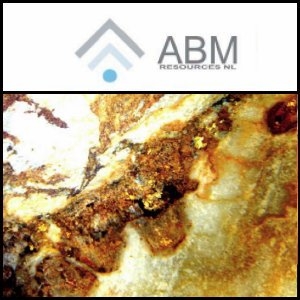 ASX:ABU) ("ABM" or "The Company") is pleased to announce further drill results from the Company's Twin Bonanza Gold Camp Project.

- BCRC100054 at the Caribbean Zone extends the system 30 metres to the south and intersects:

- Caribbean Zone remains open in all directions and is pending drilling to first resource.

- Further results from Buccaneer extend the system to the north east with Hole BCRC100051 intersecting:

Managing Director of ABM Resources, Mr Darren Holden, said "The Caribbean Zone is a distinct zone of fault / vein hosted gold within the porphyry and remains open in all directions. These latest results follow on from results of hole BCRC100045 with 21 metres averaging 2.55g/t gold and extends the system to the south with a wider intercept of mineralisation than intersected previously. This demonstrates that the Caribbean Zone has the potential to develop into a substantial system and further resource definition holes are being planned. In addition the results from hole BCRC100051 have extended the Buccaneer Deposit further to the north east and we remain very positive on further growth of this substantial system."

The Caribbean Zone is located approximately 250 metres to the north-west of the Buccaneer Porphyry Gold Deposit and is close to the contact of the porphyry. The zone is characterised by a very intense chlorite and quartz alteration associated with between 5% and 20% sulphide (principally pyrite and arsenium pyrite). The zone was first confirmed in hole BCRC100045 and along with hole BCRC100054 and historic hole TBRC0006, which intersected 2 metres averaging 62.44g/t gold, has an inferred strike length of approximately 200 metres and is open in all directions. Hole BCRC100055 was also drilled to test the Caribbean Zone but came in over the top of the zone and did not intersect appreciable mineralisation. ABM is currently planning further follow up drilling at the Caribbean Zone with a view to developing this to a JORC compliant resource estimation this year.

Hole BCRC100051 was drilled from east to west to target north east extensions of the 1.67 million ounce Buccaneer Porphyry Gold Deposit. The hole intersected mineralisation from a depth of 82 metres to 326 metres with several higher grade zones. This mineralisation extends, in part, the overall 0.2g/t cut-off envelope over 100 metres further to the north east of the existing Inferred Resource.

Hole BCRC100052 was drilled from east to west to test a zone of anomalous regolith drilling. This hole intersected low grade mineralisation. Hole BCRC100053 which is also testing north-east extensions of Buccaneer is still pending finalisation of assay results.

Update on drilling and assay results

ABM currently has two drill rigs (one diamond core rig and one reverse circulation rig) operating at Twin Bonanza. These rigs are testing extensions of Buccaneer, Old Pirate (including the recent ultra-high grade visible gold intersected) as well as the other targets on Twin Bonanza. Over 12,000 metres of drilling from Twin Bonanza are pending assay. Further assay results are being finalised and will be released as soon as received and compiled.

As announced previously ABM is testing multiple regional targets from the Company's extensive portfolio. A 14 hole program has been completed at the Kroda Gold Project located near Barrow Creek in the Northern Territory with pending assay results. The Company currently has a crew on site at the Lake Mackay iron-oxide copper gold project setting up camp and preparing drill sites for testing of four targets at Tekapo 1 and 2, Manapouri and Te Anau. Drilling is expected to commence this week at Lake Mackay.

About the Twin Bonanza Gold Camp

NYSE:NEM) multi-million ounce Callie Gold Mine. In 2010 ABM focused its effort at Twin Bonanza on the Old Pirate Prospect - a 3 kilometre anomaly with multiple high-grade zones in quartz veins hosted in sedimentary rocks and the Buccaneer Porphyry Gold Deposit - an intrusive related bulk tonnage gold deposit where the Company reported a 1.67Moz gold maiden resource in February 2011. For the remainder of 2011 ABM is focusing its effort on Buccaneer extensional targets, Old Pirate (trenching and drilling) and is testing up to 15 of the other targets in the wider Twin Bonanza Gold Camp.

For the complete ABM Resources announcement including appendixes and figures, please refer to the following link:
http://media.abnnewswire.net/media/en/docs/ASX-ABU-553518.pdf