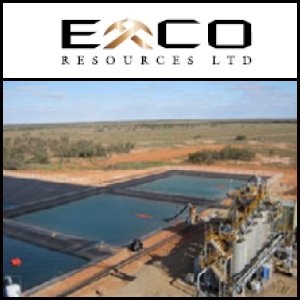 PINK:EXRSF) is pleased to announce that it has today completed the sale of the Cloncurry Copper Project to Xstrata (

Having now received the completion funds, Exco's current cash balance is in excess of A$220 million (pre-tax) which equates to approximately 62 cents per share, fully diluted. As previously announced on 3rd June 2011 the Company will now progress to return A$135 million (39 cents per share, fully diluted) to Exco shareholders by 31st October 2011 (or under reasonable circumstances where a delay is experienced, as soon as is practicable).

As noted previously in the Explanatory Memorandum accompanying the Notice of Meeting issued on the 6th May 2011, the Board intends to return the A$135 million in two steps:

a) an initial return of capital to an amount as permitted under taxation legislation, and subject to Exco shareholder approval; and,

b) the balance as a fully franked dividend.

The Company is currently arranging the procurement of a class ruling on the tax treatment of the return from the Australian Taxation Office and will inform shareholders as to the nature and timing of the return(s) as soon as possible.

The Board believes that cash retained by the Company post distributions will fund the purposeful growth of its remaining asset base. The Board has already approved an initial exploration programme of up to A$10 million for its remaining tenements in the Cloncurry, Hazel Creek, and Soldiers Cap project areas in NW Queensland. Exploration activity is underway on a number of priority targets and will continue for the foreseeable future. The Company will keep shareholders informed on progress as results are received.

Link: Completion of the Sale of CCP to Xstrata