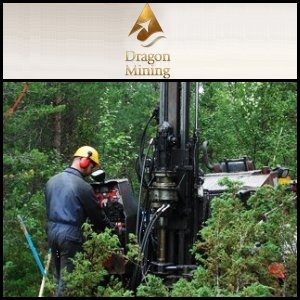 ASX:DRA) has acquired the remaining 20% of the Svartliden Gold Mine in Sweden, adding its interests to 100%. Svartliden was brought into production in 2005 and as at 31 March 2011 has produced over 255,000 ounces of gold. The success of an aggressive drilling campaign which commenced in March 2010 has resulted in production plans being extended into 2014.

ASX:BMY) has confirmed that the manganese mineralisation at the Company's flagship Oakover Project in Western Australia can produce a marketable, commercial-grade product containing up to 36.9% Mn. Follow-up drilling program is underway and an aggressive exploration program is scheduled for late 2011.

ASX:TPT) said today that independent evaluation of the prospective oil resources for the four oil prospects in the Tarfaya Block, offshore Morocco estimated a total oil potential of 867 to 4,959 million barrels of oil. Tangiers expects to drill at least one well in 2012.

ASX:GMR) has received positive preliminary soil sample assays from its Galgouli South Project in Burkina Faso. High gold-in-soil values, such as 1.12 g/t and 1.07 g/t gold, were returned. A program of geological mapping and sampling is underway to follow-up these significant gold-in-soil results.