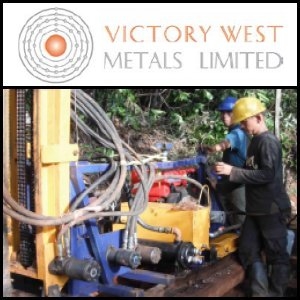 ASX:VWM) (ETR:R1E) is pleased to advise that it has mobilised an experienced team to commence technical due diligence at the Novienindo Copper Project in Sulawesi, Indonesia.

Fieldwork will commence under the supervision of the Company's consulting Geologist Mr Brett Gunter B.App.Sc (Geol) MAusIMM (GMT Indonesia) along with Dr Jonathan Nassey a Copper Porphyry expert with over 20 years' experience and familiarity with the Novienindo Project. The Company has also mobilised 6 senior geologists from the Malala project for the initial 40 day programme.

The initial field work will consist of the following:

1. Composition of a series of base maps for the concession area, including topography and geology, research surrounding mineral occurrences and styles of mineralisation.

2. Compile a database of all work completed in the area since old Dutch gold mining times, digitise all available data and determine target zones, mineralisation styles and compile a geological data model on all digital data available.

5. Collect samples from prospective zones encountered in the field, generally map the distribution of mineralisation to allow an assessment of the target size, describe the geology of the area through observations of float and outcropping lithologies.

Legal due diligence will continue in parallel with the initial field work.

About the Novienindo Copper Project

The Project is located in a known porphyry province and the geological setting is favorable for the exploration of both porphyry Cu-Au style mineralization and more discrete zones of higher grade gold mineralization.

Previous exploration at the project area include numerous Dutch exploration Adits, which were excavated early in the 1900's exploiting copper, gold and lead from high grade quartz viens.

Lead from narrow high-grade galena veins was mined and smelted on site during the 1930's and 1940's.

More recent Exploration drilling in 1999 and 2000 intersected gold and copper mineralization, with the most significant being a 34.20m gold intersection commencing at 141.80m down hole averaging 3.05 g/t Au over the intercept, with higher grade zones included within the intercept, including 4m @ 14.7g/t Au and 4.0m @ 9.1 g/t Au.

This exploration also intersected 4.00m @ 0.48% Cu and 22.00m @ 0.18% Cu commencing at 120m down hole depth. These mineralized intercepts occur in zones of potassic altered diatreme breccias. Low grade intersections of copper were also noted in other areas where drilling was completed.

The concession area contains two porphyry targets and a potential gold target located in the margin of the diatreme breccias, evidenced by the 30 metre intercept at 3.05 g/t Au in one of the old drill holes.

Potential gold targets are also thought to occur in other areas of the concession, with a large number of old Dutch adits driven into a number of discrete areas around the prime target area.

Previous exploration has included stream sediment geochemistry, rock chip sampling and trenching, a number of geophysical surveys and a series of drilling programmes by a number of explorers.