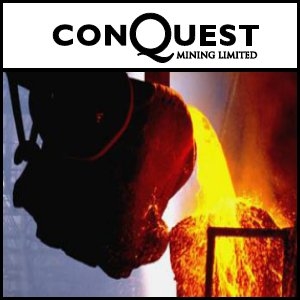 Conquest intends to use the net proceeds from the raising to fund:

- Settlement of the cash component of Conquest's proposed acquisition of HSK Gold Australia Pty Ltd (as announced on 16 September 2010), which holds Heemskirk Consolidated's (

ASX:HSK) 40% interest in the Pajingo gold mine (the other 60% interest is held by North Queensland Metals (

- Capital and exploration expenditure associated with increasing production at the Pajingo gold mine including exploration drilling, commencement of open pit mining at Pajingo and the possible development of Twin Hills deposit; and

"We are delighted with the support shown for this raising and we welcome to our share register several highly respected, gold sector institutional investors.

With the ongoing participation and support from existing shareholders the raising will allow us to advance our corporate and operational strategy."

Conquest has received binding commitments from a range of existing and new institutional investors to subscribe for A$40 million of new shares under the Placement. The Placement was priced at A$0.48 per share, which represents a 4.95% discount to Conquest's closing share price of A$0.505 on 11 October 2010 and a 4.5% discount to Conquest's 10 day volume weighted average share price of A$0.503 to and including 11 October 2010.

The Placement will be completed in 2 tranches:

- Tranche 1 - involves the proposed issue of 58,100,258 new shares at the Placement issue price of A$0.48 to raise approximately A$27.9 million. Settlement of Tranche 1 is due to take place on 19 October 2010. The Tranche 1 shares will include shares which Conquest has previously agreed to issue to Baker Steel Capital Managers LLP (or its permitted nominees). The Tranche 1 shares will be issued under Conquest's existing ASX Listing Rule 7.1 capacity.

- Tranche 2 - involves the proposed issue of 25,233,075 new shares at the Placement issue price of A$0.48 to raise approximately A$12.1 million. The issue of Tranche 2 shares is conditional upon Conquest shareholder approval under ASX Listing Rule 7.1, which will be sought at Conquest's next annual general meeting to be held before 30 November 2010.

Southern Cross Equities Limited acted as lead manager and bookrunner to the Placement.

Conquest will also offer an opportunity for existing shareholders to participate in the capital raising by way of a share purchase plan (the "SPP"). Under the SPP, each eligible shareholder will have the right to subscribe for fully paid ordinary shares in Conquest up to a maximum value of A$15,000 based on the Placement issue price of A$0.48 per share. Subscriptions under the SPP will be free of brokerage and transaction costs.

It is intended that the SPP will open on 25 October 2010 and will close on 15 November 2010. Australian and New Zealand-based shareholders registered at 12 October 2010 will be eligible to participate. The SPP is intended to be capped at A$5 million and is not underwritten. Conquest reserves the right to scale back applications if they exceed A$5 million in aggregate. Full details of the SPP terms and conditions will be released to the ASX shortly.

On 24 September 2010 Conquest issued a notice for an extraordinary general meeting ("EGM") of Conquest shareholders to be held on 29 October 2010. One of the resolutions proposed in the EGM notice was the approval by shareholders under ASX Listing Rule 7.1 of the proposed issue of A$10 million of shares and 5,500,000 options to Baker Steel Managers LLP (or its permitted nominees). However, as it is now proposed that these shares and options will be issued before the EGM date utilising Conquest's existing ASX Listing Rule 7.1 capacity, that resolution is no longer required.

This announcement effectively lifts the trading halt that Conquest requested on 12 October 2010. Conquest is not aware of any reason why the ASX would not allow trading to recommence immediately.


Link: Conquest Mining Limited (ASX:CQT) To Raise Up To A$45 Million For Future Growth