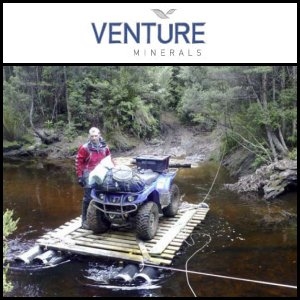 ASX:VMS) will raise A$20 million to fund ongoing exploration and feasibility studies at the Company's flagship Mt Lindsay Tin/Tungsten Project in northwest Tasmania. The fund raising follows a number of major milestones achieved by the company at Mt Lindsay including the discovery of large high grade tin and tungsten zones. The company's immediate focus is to upgrade its resource base, complete the current pre-feasibility study and continue its aggressive exploration program.

ASX:OKU) intends to expedite the granting of the ELA 25454 Killi Killi South Prospect which was lodged with the NT Government in 2007 for the purpose of assessing its uranium potential. The tenement, which covers an area of 144 km2, boarders Orion Metals Limited's (

ASX:ORM) Killi Killi Hills tenements. Assay results from Killi Killi Hills indicated the presence of heavy rare earth elements as well as uranium and gold. Upon grant of this application Oklo intends to carry out a preliminary exploration programme on the area.

ASX:ARO) has been granted the North Doolgunna Gold Project in WA. The grant came after the successful negotiation of native title and execution of Heritage Protection Agreements. The Company will now undertake an immediate and extensive work program with a view to developing the previously identified exploration targets into drilling targets.