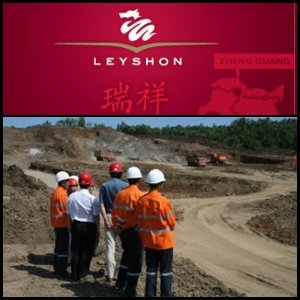 ASX:LRL) has applied for five exploration licenses in South West Mongolia as part of the company's strategy to acquire high quality coal assets located in Western China and Mongolia. The licences cover a total area of 2,664 km2, which the Company's geologists consider to be highly prospective for high quality coals including hard coking and semi soft coking coals as well as high energy thermal coals. The applied assets are located close to infrastructure and within transport distance to the Chinese market.

ASX:BMY) reported the results of a litho-structural mapping and new sampling programme recently completed at its 100% held Oakover manganese project, W.A. The manganese values ranged from 4.4% Mn to 52.8% Mn, with twelve samples returning manganese values greater than 40% Mn. The current litho-structural mapping programme will aid the planning of the next follow up drill programme that will also test several new areas, defined by high grade manganese rock sample results.

The Joint Venture between MetroCoal Limited (

ASX:MTE) and China Coal Import & Export Company (CCIEC), a wholly owned subsidiary of China National Coal Group Corp (China Coal) is now underway. The first JV Committee meeting was held in Brisbane yesterday and the exploration program was unanimously agreed on. As soon as a drilling contract can be finalised and the weather conditions improve in the Surat Basin, work will begin on EPC 1165, Columboola, with an exploration target of between 830Mt to 1165Mt.

ASX:CRC) has updated on the progress at its 100%-owned Dargues Reef Gold Project in NSW, where the Company is nearing completion of its Definitive Feasibility Study on the production of +50,000 ounces of gold per annum, over a minimum initial mine life of 5 years. Recent drilling has discovered additional gold mineralised structures close to surface with intercepts including 0.5m @ 77.0g/t, presenting the potential to increase the current estimated gold production rate of +50,000 ounces per annum in the project's early years.