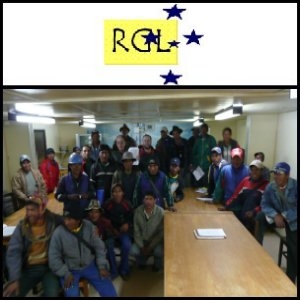 ASX:RAU) today announce that the Company, through its Bolivian subsidiary Minera Nueva Vista, has signed the Amayapampa Social Licence with Authorities from the communities around the Amayapampa Gold Project in Bolivia (the "Project").

The Social Licence is a key step for the Company to be able to develop the Project and obtain development finance.

The Social Licence has been signed by the following Authorities of the Project area:

- The Authorities of the village of Pullukeri to the west of the Project.

- The Authorities of the village of Amayapampa immediately adjacent to the Project.

- Workers from the villages of Pasuta Pampa and Chojnuma to the south of the Project.

"The Board would particularly like to thank the Company's social consultant, Mr Scott Rankin, who has been involved extensively with the communities over recent months and prepared the ground for the communities to feel comfortable in signing the final document.

"I would also like to thank Senator Efrain Condori, the local Government Senator for the Amayapampa region, for his involvement in 18 straight hours of negotiations and meetings on the day before the signing. The involvement of the Minister for Mining and Metallurgy, Sr Jose Pimentel, was also crucial in achieving the final outcome, as were a number of our key Bolivian staff, particularly Rafael de Urioste, the Company's Communications Manager. This Social Licence provides the Company with the necessary tools to expedite financing for the Project and realise the potential of what will be Bolivia's largest gold mine once developed."

The Social Licence incorporates the following crucial elements for the Company and the Project: -

- The Social Licence will continue to evolve, however it is in place for the life of the Project and for any other future mining activities within the existing mining concessions owned by the Company within the jurisdiction of the Cabildo of Janta Palca and the village of Amayapampa.

- The communities that have signed the Social Licence will allow any land, water or operating schedules (24 hours per day/365 days per year) necessary for the Project.

- The communities have acknowledged the social benefits contributed by the Company to-date.

- The communities will respect the needs of the Company in operating the Project.

- The operation of the Project will be based upon the principles of collaboration, cooperation, coordination, communication, transparency, mutual respect and democracy.

- The communities have acknowledged that the Social Licence has been entered into on the basis of free, prior and informed consent. This is a crucial Equator Principles requirement. The Equator Principles have as signatories, all of the world's major resource financing institutions.

The Social Licence incorporates the following crucial elements for the communities: -

- The Project will be operated to world's best environmental practice.

- The Company will respect existing community uses and customs.

- The Company will adequately train the workforce, including women in the communities.

- The Company will assist the communities in the formulation of Community Development Plans.

- The Company will negotiate a series of community petitions received from the communities.

The Social Licence process is an ongoing one in Bolivia. The Bolivian Government is currently drafting a new Bolivian Mining Code, which is expected to be completed within the next few months. Part of this code will include maiden provisions for future Social Licences for mining projects. Because there is an absence of any formal social licence legislation, the Company believes that this Social Licence is the first obtained in Bolivia.

For more figures, please refer to the following link: