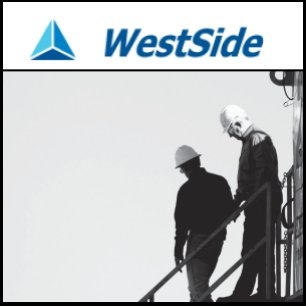 WestSide's A$26.8 million acquisition of its 51% operating stake transforms it from a gas explorer into one of Queensland's largest dedicated ASX-listed CSG producers and operators.

The change in ownership has necessitated a renaming of the gas field which will now be known as the Meridian SeamGas field. The name reflects the 150 degree 'Meridian Line' which passes through the gas fields.

WestSide Chairman and CEO Mr Angus Karoll said he was extremely pleased to confirm the completion of the purchase which was announced on 30 December 2009 when initial agreements were reached.

"This acquisition is the most significant event since WestSide listed in 2007, transforming us from an explorer into a gas producer and operator in joint venture with Mitsui, a global leader in LNG," Mr Karoll said.

"WestSide is extremely positive about our prospects now that we have completed what we believe is a very well-priced purchase of an asset that has enormous potential."

"The ultimate goal for the joint venture is to export LNG and to supply new domestic contracts from 2015 when the current supply contracts that are in place will finish," Mr Karoll said.

Mr Karoll said a WestSide team was now operating the Meridian SeamGas field and had been onsite for some weeks familiarising themselves with the operations to ensure a seamless transition.

WestSide holds a 51% operating interest in the Meridian SeamGas fields and MEPAU holds the remaining 49%. The assets were purchased from coal miners Anglo American (

The joint acquisition followed a decision by MMI (which was a 49 per cent partner), in concert with MEPAU, to waive its pre-emptive rights to acquire Anglo's stake in the producing CSG field and negotiate separate agreements with WestSide.

"The commitment from New Hope and EIT, along with the significant interest from the investment community has validated WestSide's investment in these assets", said Mr Karoll.

In summary, Mr Karoll said highlights of the acquisition were that it:

- Transformed WestSide from an explorer into a producer and operator;

- Delivered a strategic partnership with Mitsui and potential access to LNG markets through export opportunities;

WestSide announced on 29 June 2010 that it had gained indicative approval for the acquisition from Queensland's Department of Economic Development and has now met the final purchase condition by finalising gas assignment contracts with existing gas customer AGL Sales (Queensland) Pty Limited, a member of the AGL Energy (

For the Complete WestSide announcement including Meridian SeamGas Area Of Operations Map, please refer to the following link: