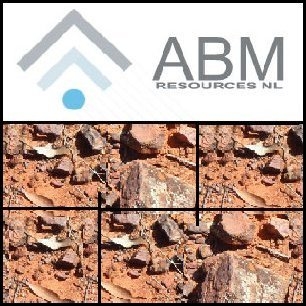 ASX:ABU) is pleased to announce that drilling has commenced on the highly ranked / multiple target Twin Bonanza Project.

Summary of Planned Stage One at Twin Bonanza

Refer to previous releases dated 1/2/2010 and 2/2/2010 and subsequent released presentations for drill hole details and context with all reported historic drill results.

About the Twin Bonanza Project

The 100% owned Twin Bonanza Project is the leading project for ABM Resources. The project is located 14 kilometres east of the Northern Territory / Western Australia border and 22 kilometres south of the Tanami Road. Twin Bonanza has at least seven targets and three early stage discoveries within a 10 kilometre by 10 kilometre area. Targets range from the large scale Buccaneer Porphyry Zone to several high grade zones including Old Pirate and the TB Hornfels Targets. Several other surface or shallow gold anomalies remain to be tested by drilling.

Darren Holden, Managing Director said, "The Twin Bonanza Project area is our leading project with multiple targets and discoveries over a very large broadly anomalous area. The juxtaposition of high-grade vein and bulk-tonnage porphyry targets makes this not only geologically intriguing but also potentially economically significant. Despite a very brief rain delay, we are very pleased to commence drilling on this project so quickly following the completion of the acquisition from Newmont and look forward to providing results in a timely fashion. In addition, we are still awaiting assay results from the Stafford Gold Zone."

Drilling commenced on the Old Pirate High Grade Zone on June 14th, 2010. Old Pirate contains a 400 metre strike length of shallowly drilled mineralised veins in a zone broadly 60 metres wide and tested to a vertical depth of 40 metres. The project sits within a 3 kilometre long geochemical anomaly. ABM has re-interpreted historic data from the area and now believes that the project consists of saddle reefs in a doubly and shallowly plunging anticline axis. The reinterpretation explains why the previous drill pattern of mostly shallow inclined holes had mixed success and led ABM to conclude that the best drill direction to test these zones is with vertical holes drilled along the anticline axis. ABM is drilling six 300m vertical holes to test for multiple saddle reefs along the axial plane of the anticline and to track the known mineralisation down plunge.

The Buccaneer Porphyry project consists of a shallow geochemical anomaly extending 3 kilometres by 1.6 kilometres. The main Buccaneer Porphyry Zone has been partially tested over a 200,000 square metre area with mineralisation, in part, within 10 metres of surface and most holes deeper than 40 metres intersecting significant widths of gold mineralisation. The Buccaneer Porphyry is the only mineralised intrusive related deposit discovered to date in the Tanami - Arunta region of the Northern Territory and has a scale of anomalism and grades comparable with >5 million ounce intrusive related gold deposits around the world such as Ayanfuri in Ghana (Perseus Mining Ltd (

Many previous holes end in mineralisation and the central Buccaneer Zone is tested only to approximately 100 metres vertical depth. ABM has reviewed the historic data and now interpret that the Buccaneer Zone contains a broad dome of mineralisation with grades generally 0.3 to 1g/t gold over 60 to 100 vertical metres and open at depth and all horizontal directions. Within this zone a 5 to 30 metre wide zone generally grades between 1.5g/t and 10g/t gold.

Following completion of the drilling at Old Pirate, the drill rig will move immediately to test depth and strike extensions of mineralisation at the Buccaneer Porphyry Zone with an initial eight holes to >300 metres depth and further deeper drilling planned for later in the program.

The TB Hornfels Zone consists of a brecciated porphyry - sediment contact. One hole to date returned high grade samples up to 235g/t gold. The zone is interpreted to be in a structurally controlled embayment in the porphyry-sediment contact and is anomalous for approximately 400 metres strike length. ABM intends to initially test continuity of this high grade zone with two holes following the initial Buccaneer Porphyry Zone drilling.

Update from the Stafford Gold Zone

ABM Resources has now completed the eight hole program at the Stafford Gold Zone for 2346 metres of drilling. The Company has already reported the best intersection to-date from these prospects. Due to an unseasonal short-spell of wet weather along with problems with core-cutting equipment, the delivery of samples to the laboratory was delayed. However, all samples from the reverse circulation drilling have now been consigned to the laboratory and are pending analysis and a contract core-cutting company in Alice Springs has been engaged to cut the remaining drill core and consign directly to the laboratory. Results are expected within two weeks.

For the complete ABM Resources announcement including figures and tables, please view the following link: