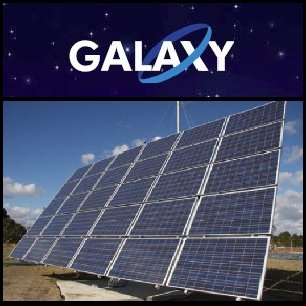 PINK:GALXF), is pleased to announce that it has placed an order with Swan Energy Pty Ltd to install 15 large solar panels and 2 wind turbines generating a total 214 MWhr per year of clean green energy at its lithium operation in Ravensthorpe.

Galaxy will be the first mine site in Australia to install the state-of-the-art-solar generation tracking technology which will supplement its diesel power generation on site. The unique tracking features will improve photovoltaic (PV) conversion efficiency by more than 40% over conventional fixed solar panels.

"Our renewable energy installation will remove about 190 tonnes of CO2 emissions from the mine site each year which is the equivalent of planting 19 hectares of forest every year" Mr Tan said.

"The capital cost of the installation has already been factored in to the Mt Cattlin A$79 million construction budget and provides an attractive payback".

Mr Tan said that effective energy storage is the key to unlocking the potential benefits of renewable energy.

Renewable energy generation from wind, solar and wave is by nature, variable and often inconsistent. When coupled with energy storage systems such as large banks of lithium ion batteries you have a competitive energy source.

"Electric vehicles are now moving from a concept to a reality with many car manufacturers planning hybrid or electric models in the coming years. The only reason this is happening is the development of technology associated with lithium batteries," he said.

"These high density powerful batteries have allowed laptops, mobile phones and power tools to be smaller, lighter and with a longer lifespan in the last few years. This same technology is being applied to electric cars such as the Nissan (

"The bright future of lithium ion batteries all leads back to Galaxy as a Company whose core focus is to supply the very important feedstock, lithium carbonate, for this growth industry".

The demand for lithium is set to triple before the end of this decade and Galaxy will be a world class player in the global industry.

"We are excited about the important contribution of lithium towards a cleaner, greener planet and we are pleased to be playing our part at the Ravensthorpe mine site," Mr Tan said.

Galaxy is on track to commission its lithium mine in Ravensthorpe by the third quarter of this year and produce lithium carbonate at its wholly owned Chinese plant by the end of the year.

Galaxy is advancing plans to develop the Sal de Vida lithium and potash brine project in Argentina situated in the lithium triangle (where Chile, Argentina and Bolivia meet), which is currently the source of 60% of global lithium production. Sal de Vida has excellent potential as a low cost brine-based lithium carbonate production facility.

Lithium compounds are used in the manufacture of ceramics, glass, and consumer electronics and are an essential cathode material for long life lithium-ion batteries used in hybrid and electric vehicles, as well as mass energy storage systems. Galaxy is bullish about the global lithium demand outlook and is aiming to become a major producer of lithium products.