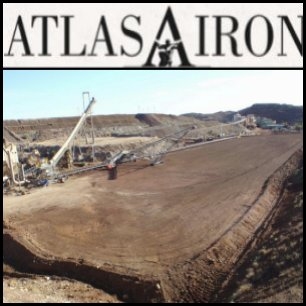 ASX:AGO) is exporting iron ore through the port of Port Hedland and actively exploring for Direct Shipping Ore (DSO) in the Pilbara of Western Australia. With a growing number of high quality iron ore projects and one of the largest exploration landholdings in the Pilbara, the Company has the resources to underpin rapid expansion plans in the North Pilbara over the next three years taking production to 12Mtpa by 2012. In the longer term Atlas is seeking to expand its operations into the Newman area, through the development of its south-east Pilbara DSO projects near Newman.

As the Company demonstrates its capacity to discover, assess and develop, it is well positioned to advance a number of projects concurrently, with the intention to both expand the Company's production base and extend mine life.

Atlas' Pardoo Project is located 75 kilometres by road from the Public Access Port of Port Hedland, in the Pilbara of Western Australia. Mining, processing and direct shipping iron ore exports are now in progress. Production at Pardoo is anticipated to reach an annualised rate of 2.4Mt, concurrent with the commissioning of the Utah Point port facility in September/October 2010, with an ultimate target of 3Mtpa mine production capacity.

Pardoo DSO Mine Development and Production

Mine production during the March quarter was primarily derived from the Bobby, Alice East and West pits, with pit development progressing at South Limb to the point where there was some initial ore production from this pit late in the quarter.

Atlas is pleased to advise that, following its shipment scheduled for late April through Fortescue Metals' (

ASX:FMG) Anderson Point port facility in Port Hedland, Atlas will have met its 18 month target of exporting an aggregate of 1.5Mt of DSO to date, and over 1Mt of DSO for the financial year ended 30 June 2010. Following this shipment in late April, Atlas will have shipped over 500,000 tonnes in the period 1 January to 30 June 2010 through FMG's Anderson Point port facility.

The new crushing and screening facility at Pardoo is now fully commissioned and operating at its interim rated capacity of 1.5 Mtpa (as of February/March 2010). As a result of the new plants installation, Atlas has started to realise a substantial saving in crushing and screening costs, in addition to having additional plant capacity to support the Company's mine expansion objectives.

Construction of the Pardoo mine is complete with the facilities now fully commissioned, providing capacity of 75 rooms to support continuous shift operations for the mines 1.5Mtpa interim run rate.

As illustrated in Table 2, there was an overall increase in inventory as the new mining contractor, Mining and Civil Australia (MACA), settled into the site and manned-up each of their work crews following the change-out of mining contractors late last year. Mining performance over the March quarter was consistent with the interim targeted production rate of 1.5Mtpa.

Iron ore sales for the March quarter were 342,085 WMT (326,521 DMT), in two cargos. One cargo was delivered under the initial Pardoo sales contract and therefore priced on benchmark relativity, while the other was sold under a contract which includes the mutual fairness adjustment mechanism, whereby spot prices are also referenced in setting the ultimate sale price.

Spot prices for the March quarter have been more than 100% above the benchmark prices agreed by major iron producers for markets outside China. Pricing for the 2010/11 year into China remains somewhat uncertain as the major producers do not appear to have agreed final pricing methodology with their key customers. Atlas' contracts provide for the pricing to follow that of the major Pilbara producers so we will continue to monitor the situation.

During the March quarter Atlas entered short dated forward exchange contracts totalling US$5 million at an average rate of USD 86 cents, with settlement to occur 30 April 2010.

Resource Development drilling continued at Pardoo through the March Quarter, with one RC drill rig and one Diamond rig active at the mine. Development and grade control drilling was completed on the Alice East Extension, Chloe and Olivia pits, before moving onto the Emma deposit, all of which are scheduled for development during the 10/11 financial year.

Development drilling will continue into May 2010, after which the rigs will progress to regional near-mine exploration opportunities.

174 RC and Diamond holes were drilled at Pardoo during the Quarter for 8,776 metres.

The Wodgina DSO Project is located approximately 100 kilometres south of Port Hedland and immediately adjacent to the existing Wodgina Tantalum mine, owned by Talison Minerals.

Construction at the Wodgina DSO Project is now largely complete. The upgrade to the intersection of the mine access road with the Great Northern Highway was completed during the quarter. CSI Pty Ltd has completed the required modifications to the existing crushing and screening plant to facilitate iron ore sampling and final product stacking, with dry commissioning completed subsequent to the end of the quarter. Bulk earthworks to establish run-of-mine and final product stockyards are now also complete.

Following an extensive tender process for the Wodgina mining contract Atlas is pleased to advise that it has awarded to BGC Contracting Pty Ltd (BGC). BGC is an experienced mining contractor, with several current contracts across Western Australian iron ore mine sites. Atlas and BGC look forward to a mutually rewarding relationship, with BGC participating in the growth of Atlas' business and Atlas leveraging of their experience.

Consistent with the timing of delivery of the Utah Point port facility in September/October this year, mining will commence at Wodgina in June 2010. With the imminent commencement of mining at Wodgina, and Pardoo poised for expansion, the Company is well on its way to achieving 6Mtpa of DSO production by the end of the year.

In January 2010, the Company announced it had entered into two new long term off-take agreements with medium-sized Chinese steel mills covering a total of 1.1 million tonnes per annum of Atlas DSO product. These two off-take agreements represent approximately 30% of the increased production that will occur upon commencement of the 100%-owned Wodgina DSO Project and cover the period to 31 March 2013. Atlas' marketing team has received numerous expressions of interest for the remaining tonnes and will look to finalise further agreements in coming months.

In January 2010, Atlas announced a 120% increase in the Wodgina Reserves to 20.9Mt at 57.7%Fe, as a result of additional infill and exploration drilling in the second half of 2009.

Optimisation and design studies at Wodgina contributing to this Reserve statement have resulted in overall strip ratios (waste:ore tonnes) of approximately 1.5:1.

The Abydos Project is located 100 kilometres south of the Public Access Port of Port Hedland in the Pilbara of Western Australia. Atlas is advancing project approvals at Abydos as part of the Company's next step up in production to 9 million tonnes per annum by the end of 2011.

Work is progressing well and approvals are expected to be achieved ahead of schedule.

The Mt Webber DSO project is located approximately 150km southeast of Port Hedland, 40km east of the FMG railway line and adjacent to the Woodstock to Marble Bar road. Mt Webber is a 70:30 joint venture between Atlas Iron and Altura Mining Ltd (

ASX:AJM). The project is the fourth of Atlas' main Pilbara DSO project areas, along with Pardoo, Wodgina and Abydos, which are expected to underpin the Company's expansion through to 2012.

Drilling recommenced at Mt Webber in late March 2010, with two diamond holes completed for 125 metres by the end of the quarter. This programme, which is expected to be completed during the June quarter, will provide data on metallurgical characteristics, bulk density, RCDiamond assay quality and geotechnical parameters. Given the existing RC data set and the uniformity of both the physical shape and grade distribution within the Mt Webber mineralisation envelope, the additional diamond drilling data is expected to allow upgrading of a significant portion of the resource from Inferred to Indicated category.

The Woggaginna DSO Project is located approximately 55km southeast of Newman in the Southeast Pilbara region of Western Australia. Surface iron enrichment over Archaean BIF horizons was first identified in a number of areas by Warwick Resources Limited, who commenced drilling the Wishbone prospect in 2009. A number of other exploration targets within the project area are yet to be tested.

Exploration recommenced at the Wishbone prospect during March 2010, with a programme designed to carry on from Warwick Resources' previous drilling in late 2009. By the end of March, 35 RC holes were completed for 2,806 metres. Subsequent to the end of the quarter the Wishbone drilling was completed, and the rig moved onto other targets within the project area, to the northeast.

Drilling was successful in extending the Wishbone mineralisation along strike to the north and south. Although the mineralised envelope remains open in some areas, an initial inferred resource estimation will be compiled during the June quarter. Ongoing exploration will continue both within the project area and also within the region, with drilling planned at McCameys North and Hickman in the June quarter.

Atlas completed the Preliminary Feasibility Study (PFS) for the Ridley Magnetite Project on 14 April 2009. The completion of the PFS marked the culmination of two years work in diamond drilling, resource modelling, metallurgical test work, process development and mine planning managed by Atlas.

During the March quarter, Atlas continued to progress negotiations with a number of significant international entities regarding the purchase of equity in the Ridley project. Post quarter end, extensive negotiations have occurred with one party and detailed formal contracts have been prepared in conjunction with that party's advisors. Final agreement has not yet been reached and discussions continue with a range of parties.

Construction of Utah continued during the period and completion remains scheduled for September/October 2010. Atlas is actively working with PHPA on options to fast track project commissioning and the commencement of exports from the facility.

PINK:AUOXF) under which Atlas advanced an interest free loan of A$13.86 million to Aurox in consideration for Aurox granting Atlas a first right of use over any of Aurox's unused or surplus berth, shiploading and stockpiling capacity, as well as other potential future benefits.

On 10 March 2010 Atlas and Aurox announced their intention to merge the two companies. If successful Atlas will obtain additional port capacity at Utah and become the largest customer of the facility.

Atlas Iron is a founding member of the North West Iron Ore Alliance (NWIOA), a group of independent iron ore producers and explorers progressing projects in the Pilbara of Western Australia.

Since the last quarterly report the Company has issued 469,500 shares. The shares were issued following exercise of options.

On 10 March 2010 Atlas and Aurox Resources Ltd announced their intention to merge by scheme, with Aurox shareholders to receive one Atlas share for every three Aurox shares. The scheme meeting is planned for June 2010.

- Continue mining and upgrade production rate from 1.5Mtpa to 2.4Mtpa in the second half.

- Mobilise the mining contractor to site and commence mining.