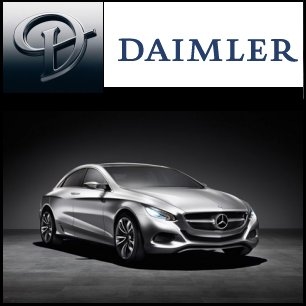 EPA:RNO) has agreed Monday on a capital and business tie-up deal with Germany's Daimler AG (ETR:DAI). Nissan and Renault plan to obtain stakes of around 3 percent in Daimler while the German automaker is set to take similar stakes in each of the alliance partners. The three companies are expected to share parts and platforms in order to cut costs. Renault currently owns 44.3 per cent of Nissan and the Japanese automaker has a 15 per cent stake in the French firm.

TYO:5020), will begin talks with Mitsui Marubeni Liquefied Gas to integrate their liquefied petroleum gas (LPG) businesses by the end of fiscal 2010 which started this month. Nippon Oil will split its LPG business for absorption by Mitsui Marubeni Liquefied Gas and create a new company, which is expected to become Japan's largest LPG supplier with domestic market share of about 25 percent. Nippon Oil will take a majority stake in the new company.

SEO:005930) said Tuesday it estimates first-quarter operating profit at 4.3 trillion won, up from profit of 590 billion won a year earlier, thanks to a strong recovery in semiconductor business and robust TV sales. The company also said its sales rose about 19 per cent to 34 trillion won in the three months ended March 31.

ASX:MCC). Last week Peabody's unsolicited bid was rejected by Macarthur Coal. The bid was conditional on Macarthur not proceeding with a proposed A$832 million takeover of Noble-controlled Gloucester Coal (

ASX:GCL). Noble Group said on Monday it has made a A$12.6 a share all-cash offer for Gloucester Coal for the remaining shares it does not already own.