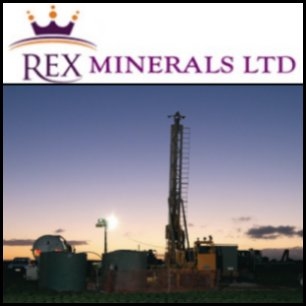 ASX:RXM) directors present their report together with the consolidated interim financial report for the half-year ended 31 December 2009 and the review report thereon.

Hillside Project
In South Australia, Rex has focussed its attention on the Hillside Project which is situated on the east coast of the Yorke Peninsula. Rex has uncovered extensive copper mineralisation which coexists with a large magnetic anomaly at the Hillside project. The copper at Hillside has a close association with the mineral magnetite, which is the cause of the magnetic anomaly. This association has been the key to unlocking the location of the copper underneath the shallow sediment cover that has kept the copper mineralisation effectively hidden from previous explorers.

The significance of the association between the magnetic anomaly and copper was recognised in early 2009. As a result, detailed magnetic surveys were undertaken around mid 2009, both at Hillside and regionally along the entire 60km long section of the Pine Point Copper Belt. The detailed magnetic image produced at Hillside was used to target copper mineralisation with an extremely high success rate, to the extent that every drill hole completed in the last quarter of 2009 intersected copper mineralisation.

In addition, in the later part of 2009, extensive shallow copper mineralisation was discovered at Hillside. An electromagnetic (EM) survey flown by helicopter in mid 2009 appears to have the ability to identify where shallow copper mineralisation exists in the Hillside area. This has defined a broad anomaly to the east of the initial discovery at Hillside which extends in a north-north-easterly direction for a total length of over 3km.

A large regional high-resolution magnetic survey was flown over the entire Pine Point Copper Belt in early October. Multiple large-scale targets were identified from the results of this survey outside of the Hillside project. Of particular significance are the Parara and White Cliffs targets which are distinct analogies to Hillside with high-grade historical copper mines in close proximity to large magnetic anomalies.

Rex has 100% ownership over a 60km section of the highly prospective Pine Point Copper Belt ('PPCB') on the Yorke Peninsula of South Australia between Pine Point, Ardrossan and White Cliffs. The features which attracted Rex to the area and underpin its current focus include: Historic finds - Multiple historical high-grade copper deposits exist along the PPCB.

Thin cover - Most of the Pine Point Copper Belt is "hidden" by a thin layer of cover rocks (approx. 10m to 50m thick).

Multiple targets - A range of prospects and targets exist along a 60 km section of the copper belt.

Scale - Large-scale and high-grade copper mineralisation has now been discovered (Hillside) at one of many "hidden" targets along the PPCB.

Setting - The copper mineralisation discovered to date is associated with magnetite, which in high concentrations will produce magnetic anomalies on detailed surveys allowing Rex to "see through" the cover rocks to focus on new targets.

Modern Techniques - Detailed high resolution magnetic surveys have the potential to redefine in much greater detail a large number of copper targets.

Infrastructure -The proximity to Adelaide (1.5hrs by car) and the location of a major highway along the entire length of the Peninsula and the nearby ports will assist the economics of new developments.

Power - The region is connected to the State's main power grid.

The aim of the 2010 exploration program in South Australia is to deliver a large-scale Resource at Hillside, leading to feasibility work starting in 2011. In addition, exploration is also being focussed towards the discovery of new copper mineralisation outside of the Hillside Project on the Pine Point Copper Belt, using the knowledge gained from the Hillside discovery.

Rex took ownership (100%) of the Mt Carrington copper-gold-silver Project in 2009, which is located in north-eastern NSW. The Mt Carrington project has an existing Inferred Resource comprising 190,000 ounces of gold and 10.5 million ounces of silver.

Exploration at the Mt Carrington project during 2009 included a number of drill holes targeting copper, gold and silver mineralisation in addition to multiple new geophysical surveys including the completion of the 400km2 high resolution airborne magnetic survey.

A review of the existing drilling data, combined with a large new geophysical dataset has identified a number of gold, copper and silver targets to be drill tested in the March quarter. These targets represent extensions to the known gold (Strauss and North Kylo) and silver (White Rock, Silver King) prospects, along with new deeper targets considered to display strong potential for larger scale porphyry and breccia hosted copper mineralisation.

During the period, the Company successfully undertook a 3 for 1 accelerated non-renounceable pro rata entitlement offer (Entitlement Offer) to raise approximately A$42m. The Entitlement Offer allowed all eligible shareholders to participate and comprised an institutional and retail offer, both underwritten by EL & C Baillieu Stockbroking Ltd. The entitlement proceeds are being used by the Company to commence Resource definition drilling at Hillside; begin testing of targets that have been identified by the high resolution magnetic survey over the Pine Point Copper Belt in South Australia and also to complete drill testing the large scale concepts for copper, gold and silver mineralisation at Mt Carrington, NSW.

In February 2010, the Company appointed Mr Brian Phillips and Mr Geoffrey Lowe to its Board. Mr Phillips and Mr Lowe bring a range of experiences with them to add depth to the Board as the Company continues to move forward. Ms Amber Rivamonte returned from leave and resumed her role as Company Secretary.

The lead auditor's independence declaration is set out on page 23 and forms part of the directors' report for the half-year ended 31 December 2009.

Dated at Melbourne this 25th day of February 2010.

Signed in accordance with a resolution of the directors:

The directors of the Company at any time during or since the end of the half-year are:

For the complete Rex Minerals Half Yearly Report, please click the link below:

The strategy at Rex Minerals Limited is to acquire highly prospective projects with the potential to host large resources in commodities that are in high demand. Rex has ownership of projects covering the commodities of Gold, Silver, Copper and Iron. They are located in two states (SA and NSW) and are within geological terrains that are known for their endowment in these commodities. Rex then applies its extensive technical experience and existing drilling capacity to progress these projects. These projects will lay the foundations for long term internal growth of Rex as we forge ahead to become a diversified exploration and mining company. 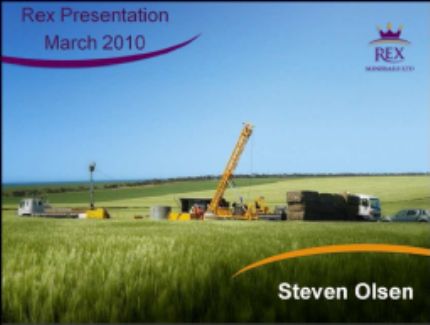