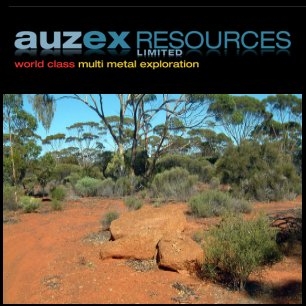 Auzex Resources Ltd (ASX:AZX) has signed a Heads Of Agreement with London-based Central China Goldfields (CCG)(LON:GGG) to develop the Bullabulling gold project near Kalgoorlie in Western Australia.
Sydney, Feb 16, 2010 AEST (ABN Newswire) - Australian shares dropped on Monday as investors were nervous ahead of the EU meeting over Greek debt. Trading was quiet in local market while most Asian bourses were closed for Lunar New Year on Monday, Wall Street also closed because of a public holiday. At the close, the benchmark S&P/ASX200 index fell 16.6 points, or 0.4 per cent, at 4545.5, while the broader All Ordinaries index shed 18.4 points, or 0.4 per cent, to 4570.4.

The Australian Bureau of Statistics said Monday total personal finance commitments rose 0.2 per cent in December, seasonally adjusted, to A$7.04 billion, from A$7.03 billion in November.

On Tuesday, the Reserve Bank of Australia is set to release its minutes for February board meeting. Housing Industry Association publishes trades report for December quarter, 2009 and National Australia Bank releases monthly business survey for January.

It was speculated that Healthscope Ltd. (

ASX:HSP) was closing in on a A$200 million acquisition of Arcare, an operator of 1300 aged care beds in Victoria and Queensland. Healthscope confirmed that it has scrapped a proposed acquisition in the aged care sector and an associated capital raising. Healthscope Ltd posted a 17.5 per cent rise in first half profit and expects stronger earnings growth in the second half. Net profit for the first half of 2009/10 was A$45.13 million, up from A$38.42 million in the prior corresponding period.

ASX:BSL) expects to return to the black with a small net profit in 2009-10, largely due to continued improvement in domestic and export demand, improved steel prices and further cost cuts. The steelmaker reported a first-half loss of A$28 million.

ASX:WAN) reported a 15.4% net profit drop to A$49.5 million for the six months to December 31, 2009. But WAN said it started to see some positive trends due to an improvement in advertising conditions, potential cost reductions for newsprint and a buoyant local economy.

ASX:ANG) posted a net profit of A$8.17 million for the half year to December 31 2009 compared with A$8.13 million in the prior corresponding half. Chairman Peter Fitch said Austin's growing market position and financial strength would enable the group to take advantage of the stabilised and improved economic environment.

ASX:AZX) has signed a Heads of Agreement with London-based Central China Goldfields (CCG) (

LON:GGG) to develop the Bullabulling gold project near Kalgoorlie in Western Australia. CCG will pay A$2.5 million to earn half of the project within a two month timeframe.

ASX:MAH) said it has been awarded a three year contract extension at BHP Billiton Iron Ore's Orebody 18 and Wheelarra mines in Pilbara region of WA. The extension, valued at over A$500 million, will see Macmahon continue to provide a complete mine service including drill and blast, mining, crushing and train loading at the site.

ASX:LEI) subsidiary Thiess Pty Ltd has won an A$800 million long-term contract to help expand Wesfarmers Ltd's Curragh coal mine in central Queensland. Thiess began operations at Curragh North in October 2004 and was awarded a A$260 million contract extension in 2008. The new contract will see Thiess at the mine for a further ten years.

ASX:BEN) said net profit increased 105.7 per cent to A$104.1 million for the six months to December 31 2009, on revenue up 23.7 per cent to A$534.2 million. Bendigo and Adelaide Bank expects a strong result in the second half and says it remained cautiously optimistic about future financial performance.