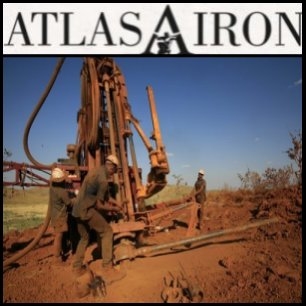 ASX:AGO) is pleased to provide a Quarterly Activities Report for the period ended 31 December 2009.

Atlas Iron is exporting iron ore through the port of Port Hedland and actively exploring for Direct Shipping Ore (DSO) in the Pilbara of Western Australia. With a growing number of high quality iron ore projects and one of the largest exploration landholdings in the Pilbara, the Company has the resources to underpin rapid expansion plans in the North Pilbara over the next three years. In the longer term Atlas is seeking to expand its operations into the Newman area, through the recently completed merger with Warwick Resources Limited.

As the Company demonstrates its capacity to discover, assess and develop, it is well positioned to advance a number of projects concurrently, with the intention to both expand the Company's production base and extend mine life.

The top 20 shareholders hold approximately 60.75% of the issued capital. Since the end of the quarter report the Company has issued 7,500 shares pursuant to the exercise of unlisted options.

Since the last quarterly report the Company has issued 47,217,265 shares. The shares were issued as follows:

- Issue pursuant to the merger with Warwick Resources Limited: 41,744,547 shares.

At the date of this report Atlas holds a 45.46% interest in Shaw River Resources Limited (Shaw) (

In December 2009 Atlas completed the merger with Warwick Resources Limited (

Atlas welcomes Warwick shareholders to its register. As a result of the merger, in addition to the targeted 12Mtpa production profile from Atlas' existing North Pilbara DSO projects, Atlas will be targeting additional production of 14Mtpa from Atlas' and Warwick's South East Pilbara projects by 2014. Achieving this targeted DSO production rate of 26Mtpa will also be conditional on project related feasibility studies, environmental permitting, infrastructure access agreements and timely project construction.

For the complete Atlas Iron Quarterly Report for the period ended 31 December 2009, please click the link below: