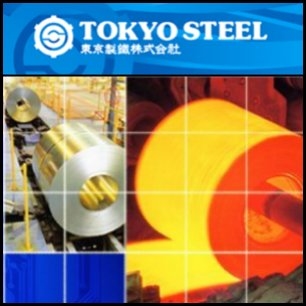 TYO:5423), Japan's biggest maker of construction steel, said it would raise domestic prices on all its products in February. That would increase the price of its mainstay H-beam steel by nearly 5 percent to 66,000 yen. The company will also resume exports of hot coil and H-beam steel for the first time since September 2008 to tap the steel markets in China, other Asian countries and the Middle East.

TYO:1662), known as Japex, Monday finalized an agreement to develop southern Iraq's Garraf oil field, which is believed to hold 863 million barrels of oil. Petronas has 60 per cent stake in the joint venture while Japex holds the remaining 40%. The consortium requested a fee of $1.49 for each barrel extracted from the field and pledged to reach a production plateau of 230,000 barrels a day.

SEO:051910), which signed a deal to supply batteries for the Chevrolet Volt from GM. It is reported that GM is considering picking Samsung SDI, the world's second largest maker of rechargeable batteries by output, as a its battery supplier.

TYO:6758), said a Taiwan newspaper. Sony hopes to increase sales to catch up with competitors through a partnership with Chi Mei.

HKG:0316) China property business for US$2.2 billion, in a move that will significantly boost its prime real estate portfolio in two of China's biggest cities. Through the deal, Capitaland will acquire seven sites in the greater Shanghai area and Tianjin, comprising mixed-use projects under development with total gross floor area of 1.48 million square meters.

HKG:2600) said it expected to post a loss for 2009 due to declining demand and overcapacity that led to losses in the first half of the year. Chalco reported a net loss of 3.52 billion yuan for the six months ended June 30, compared with a net profit of 2.39 billion yuan a year earlier, under Chinese accounting standards.