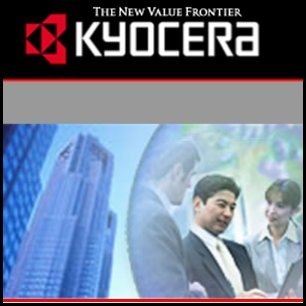 Kyocera Corp.( TYO:6971)
Sydney, Jan 11, 2010 AEST (ABN Newswire) - US stocks was slightly higher on Friday, hitting at least 15-month closing highs despite a bigger-than-expected job loss data. US dollar was lowered on the disappointing payroll data. This week the US firms, which are widely expected to show significant improvement compared to the corresponding period last year, will kick off the quarterly earnings reporting season.

SEO:066570) of South Korea aims increase its global market share in liquid-crystal-display television (LCD TV) to 15 per cent this year from 11 per cent last year. LG said its LCD TV sales target for 2010 is 25 million units, a 54 per cent rise compared to the unit sales in 2009. LG said it plans to boost its plasma TV sales in emerging markets such as Asia, the Middle East and Central and South America by focusing on screen sizes of at least 50 inches.

LON:XTA), Indophil's biggest shareholder through an unsuccessful 2008 hostile bid, has agreed to sell its 19.9 per cent stake in Indophil into Zijin's bid in the absence of a better offer. The bid was made at A$1.28 per Indophil share, representing an 18 percent premium to the Indophil stock price before the bid was announced. The Zijin acquisition will be attempted through an off-market takeover and is conditional on 90 per cent acceptance.

TYO:9205) could be forced into bankruptcy within the next two weeks. The state-owned Development Bank of Japan (DBJ) is believed to have already agreed to the bankruptcy. The government and the Enterprise Turnaround Initiative Corporation of Japan, a state-backed turnaround body, have asked Kazuo Inamori, honorary chairman of Kyocera Corp.(

TYO:6971), to assume the post of chief executive officer of JAL to lead the ailing airline's reconstruction, said sources familiar to the matter.

SHA:601668) said Monday it signed a total of CNY412.3 billion worth of new construction contracts in 2009, up 41.8% from a year earlier. CSCEC, China's largest home builder, said that sales for its real estate business reached 46.9 billion yuan in 2009, up 77 percent over the previous year.