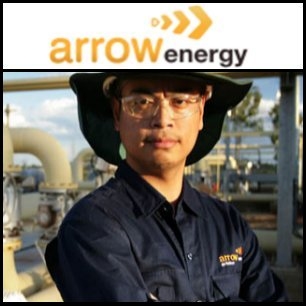 Arrow Energy Ltd. ( ASX:AOE) said Monday that it has acquired a 35% stake in a Chinese coal seam gas block from Fortune Oil PLC ( LON:FTO) for US$13.3 million and has an option to increase its holding to 75%.
Sydney, Dec 22, 2009 AEST (ABN Newswire) - The Australian sharemarket ended slightly lower on Monday after a positive start driven by a resources sector buoyed by higher commodity prices. The pullback was led by major banks, and consumer staples. At close, the benchmark S&P/ASX200 index was down 6.4 points, or 0.14 per cent, to 4644.1, while the broader All Ordinaries gave up 6.1 points, or 0.13 per cent, at 4665.8.

Australian Bureau of Statistics data showed that motor vehicle sales in Australia jumped by 5.5 per cent in November compared to the previous month, as businesses taking advantage of the federal government's 50 per cent investment tax allowance that is due to end on December 31. In November a total 85,943 vehicles were sold. Vehicle sales in the year to November soared by 15.8 per cent.

Macquarie Harbour Mining Limited (ASX:MHM) has completed another of the key conditions to the aluminium salt slag project acquisition. Alcoa Rolled Products has now entered into a three-year salt slag processing agreement for between 33,000 and 39,000 tonnes of material. MHM's wholly owned subsidiary Alreco will acquire from Sims (ASX:SGM) an aluminium salt slag business, associated plant and equipment and underlying land and buildings.

Arrow Energy Ltd. (ASX:AOE) said Monday that it has acquired a 35% stake in a Chinese coal seam gas block from Fortune Oil PLC (LON:FTO) for US$13.3 million and has an option to increase its holding to 75%.

Qantas (ASX:QAN) said its first half profit should be between A$50 million and A$150 million and expects high levels of volatility in the economic outlook, industry capacity, passenger demand, fuel prices and exchange rates will continue.
RHG Ltd. (ASX:RGH) said Monday that it has breached a loan covenant on a A$324 million debt facility, triggering a cross default on other loan facilities. The total amount for which there could be a potential event of default through cross default is A$2.526 billion.

Property developer Lend Lease (ASX:LLC) said it has launched a new wholesale fund that will invest in regional Australia shopping centres and commercial property after receiving investor commitments totalling A$218 million. The fund, to be named Lend Lease Real Estate Partners 3, will make its investments over the next 12 month, taking advantage of opportunities that emerge in a weak market.

Overseas & General Limited (ASX:OGL) said it has signed an agreement with PT Indotrade Resources and Golden Focus Pte Ltd (incorporated in Hong Kong) to do a joint venture in coal mining and exploration in 23,960 hectares in East Kalimantan, Indonesia. OGL will undertake due dilligence in the next two months before signing a formal agreement with the joint venture partners.

Engineering and construction company Clough Limited (ASX:CLO) said as a result of Final Investment Decision to proceed with the PNG LNG Project led by Exxon Mobil, funding has been released to allow the Clough Curtain Joint Venture (CCJV) to proceed with executing the full scope for the Upstream Infrastructure contract awarded on 1 May 2009. Total value of work to be performed by CCJV will be about AU$650 million.

Straits Asia Resources Limited (ASX:SRL) (SIN:AJ1) said it has entered into a five year club financing facility for US$380 million to refinance its existing US$255 million debt, provide additional capital and funds for the company's planned expansion of its coal production. The facility is fully committed for five years and comprises a term loan facility of US$250 million, a revolving working capital facility of US$50 million and a Letter of Credit/Bank guarantee facility of US$80 million.