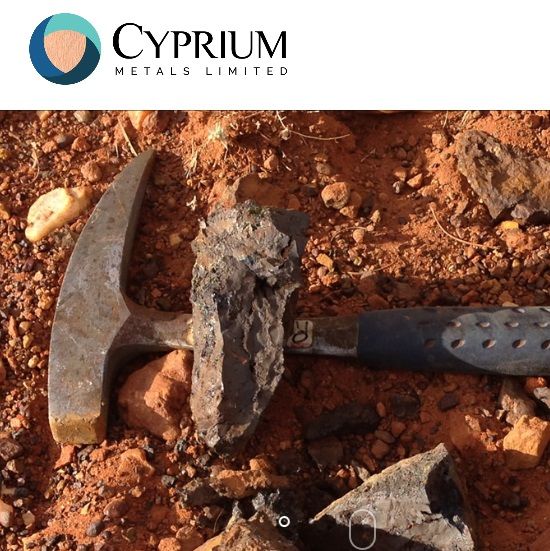 ASX:CYM) is pleased to advise that it has signed a Sale and Purchase Agreement for 100% of tenements E51/1040 and M51/887 with Horizon Minerals Limited (

Tenement E51/1040 covers an area of 45km2 and is part of a northwest trending belt of Archean mafic and metasedimentary units with demonstrated prospectivity for both magmatic coppernickel-PGE mineralisation and gold lode mineralisation.

The Nanadie Well deposit has a 2004 JORC Code Compliant Inferred Resource of 36.07Mt @0.42% Cu containing 151,506 tonnes of copper and 0.06g/t Au containing 74,233 oz of gold1. The project also contains the Stark Cu-Ni-PGE prospect along with a number of drill ready targets that offer excellent exploration upside.

Executive Director Barry Cahill commented "We are pleased to acquire 100% of the Nanadie Well Project, which includes a significant 2004 JORC compliant copper mineral resource that is near surface and remains open along strike and at depth.

The Nanadie Well deposit and Stark mineralisation are both very prospective, and we will initially focus on geological interpretation activities from which we will then plan our resource definition and extensional drilling programmes.

The Nanadie Well copper deposit is located only 75km to the east of our Hollandaire copper deposits and is an exciting addition that increases our regional mineral resource base which forms part of the ongoing Cue Copper Project scoping study."

The Nanadie Well Project is located approximately half-way between Sandstone and Meekatharra in the Murchison District of Western Australia, on Exploration Tenement E 51/1040.

The project straddles the Baranbie and Poison Hills greenstone belts, with basement rock types consisting of felsic-ultramafic volcanics, granite and gabbroic intrusions. The presence of the historic Gloria June gold mine, the Nanadie Well Cu-Au deposit and the Stark Cu-Ni-PGE prospect outlines the potential of the project to host several different mineralisation styles.

The tenement that contains Nanadie Well is approximately 75 km East of the current Hollandaire resource, as illustrated in Figure 1*. The project covers part of the northwest trending belt of Archean mafic and metasedimentary units with demonstrated prospectivity for both magmatic copper-nickel-PGE mineralisation and lode gold mineralisation. The oxide mineralisation comprises malachite/azurite which often forms a zone of localised supergene enrichment. The ore below 40 metres depth is mostly fresh disseminated fine grained chalcopyrite within a sequence of basalts/amphibolites, felsic volcanics and dolerite. The mineralisation outline, surface expression and selected intersections is shown in Figure 2*. The Nanadie Well Prospect contains a shallow and broad 2004 JORC Compliant Inferred Resource1 (as outlined in Table 1*), including the following intercepts:

During 2020, Horizon conducted Reverse Circulation ("RC") recent drilling on the Nanadie Well deposit (refer to HRZ ASX announcement on 20 May 2020) of 14 RC holes to a maximum depth of 55m and confirmed the presence of a high grade, shallow supergene Cu-Au zone that remains open along strike and at depth. Significant results include:

At the Stark prospect, RC drilling intercepted copper, gold and PGE's at depth, including:

The recent drilling results by HRZ indicated that Nanadie Well and surrounds have a much higher copper and gold prospectivity than previously thought. The small first pass RC program, as reported above, was successful infill and extending the high-grade areas in the top 100m of the Nanadie Well resource. This program now needs follow up and near surface drill testing needs to be undertaken at the Stark Prospect as there has been limited drilling conducted and to drill test extensional targets.

A Mining License application (M51/887) has been lodged over the Nanadie Well (Cu- Au) and Stark (Cu-Ni-PGE) prospects.

The following up-front consideration is payable by Cyprium to Horizon:

The following deferred consideration will be payable by Cyprium to Horizon:

ASX:MGV), an option was granted by Musgrave Minerals Limited to earn-in and joint venture for an 80% interest in the non-gold rights over the tenements at the Cue Copper Project (CYM ASX Release 25 March 2019).

The earn-in expenditure requirement for an 80% interest in the non-gold rights over the tenements at the Cue Copper Project, WA was met during the March 2020 quarter which was required for the transfer of the interests and formation of the joint venture (CYM quarterly activities report released on 17 April 2020).

Cyprium Metals Limited (ASX:CYM) is poised to grow to a mid-tier mining business and manage a portfolio of Australian copper projects to deliver vital natural resources, strong shareholder returns and sustainable value for our stakeholders. We pursue this aim, in genuine partnerships with employees, customers, shareholders, local communities and other stakeholders, which is based on integrity, co-operation, transparency and mutual value creation. 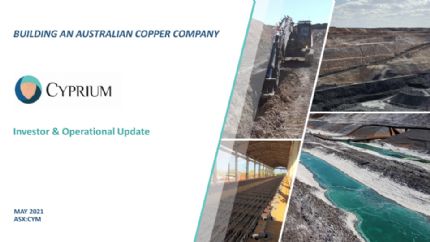