OTCMKTS:EEGUF) is pleased to provide shareholders with its Quarterly Activity Report for the period ending 30 September 2019.

- Empire completed sale of Kansas assets for a final sale price of US$19.25 million

- Empire reduced total debt from US$25.4 million to US$7.5 million during the quarter

- Empire US operations had another solid quarter

- Empire ended the quarter with US$3.9 million cash at bank

Empire has been one of the most active companies in the Beetaloo and McArthur Basins since the lifting of the moratorium in April 2018 and subsequent implementation of regulations to allow a recommencement of industry activities.

1 appraisal well in the Beetaloo Basin. The well, which is operated by Origin Energy, is located in EP117 on trend with Empire's EP187 permit. The objective of the Kyalla 117 N2 1 well is to assess hydrocarbon maturity, saturation and reservoir quality and collect data for subsequent horizontal drilling, completion, stimulation and production testing.

Empire Energy (ASX:EEG) (OTCMKTS:EEGUF) is a conventional oil and natural gas producer with operations in Appalachia (New York and Pennsylvania) and the MidCon (Kansas and Oklahoma).

The Company has over 14.5 million acres in the McArthur & Beetaloo Basins, Northern Territory, both of which are considered highly prospective for large shale oil and gas resources. Work undertaken by the Company over the past 5 years demonstrates that the Central Trough of the McArthur Basin, of which the Company holds around 80%, is highly prospective, with key similarities to those extending through Oman, Siberia and Southern China and which contain resources of billions of barrels of oil equivalent. 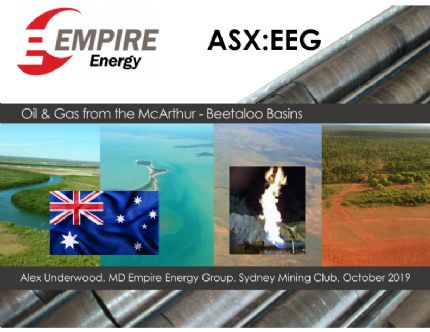