FRA:LK1) announced today the appointment of financial advisors, SD Capital Advisory Limited, to secure debt funding of up to US$25 million for pre-production, definitive feasibility studies (DFS) and initial production of lithium products from the first stage of a commercial plant from its 100%-owned Kachi Lithium Brine and Cauchari Lithium Brine Projects in Argentina.

SD Capital Advisory Limited will focus on obtaining debt finance for the development of Lake's 100%-owned lithium brine projects with an immediate focus on Kachi given the Pre-Feasibility Study (PFS) will be completed before year-end.

Lake is assessing a range of funding solutions through debt or investment directly at the project level in order to minimise any potential dilution to Lake's equity investors.

"We look forward to demonstrating an industry-leading solution for fast, efficient, scalable and sustainable lithium extraction from the heart of the Lithium Triangle, home to the world's lowest cost production, and now we have an experienced project and debt finance advisor to support us." 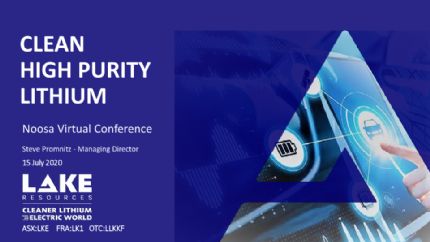