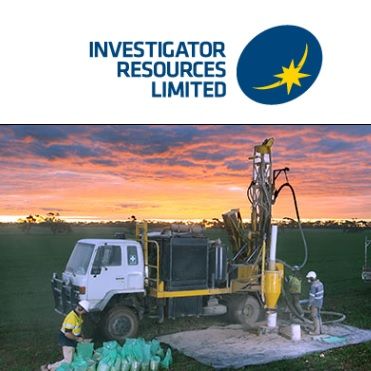 ASX:IVR) ('Investigator') is pleased to provide the following updates in relation to its previously announced reviewed corporate strategy and existing projects.

The Paris Silver Prospect is Investigator's key asset where a JORC (2012) Mineral Resource estimate of 42 million ounces of silver and 55 thousand tonnes of lead positions Paris, in Investigator's opinion, as one of the best undeveloped silver projects in Australia and offers shareholders significant upside to the silver market.

Used primarily for electrical circuitry and for its natural biocide qualities, the price of silver having historically seen values in excess of US$40/oz, has in 2018 fallen to under US$15/oz - see price chart below (see link below).

As reported earlier this year (IVR ASX Release: 7 May 2018), follow up work to the 2013 metallurgical testwork (IVR ASX Release: 21 October 2013) conducted by Core Metallurgy ('Core') had been commissioned with the principal objective of defining opportunities to improve the metallurgical recoveries and support the Paris Project Pre-Feasibility Study ('PFS').

In the 2018 study, Core carried out gravity, flotation and leach testwork aimed at improving silver recoveries, as well as identifying methods to recover lead/silver concentrate which were not examined in 2013. This work was focussed on samples taken from 4 distinctive mineralogical domains, being:

- Breccia Transitional (with Carbonate/ Magnesium); and

The objective was to determine if selective processing could improve recoveries. The findings of this work were reported in the Investigator ASX announcement in May 2018. With conventional cyanide leach trials delivering silver recoveries within a range of 65% to 89% - averaging around 74%.

As a result of this work, the poorly recovering BT Transitional (without Carbonate/Magnesium) domain was subdivided into two essentially geological sub-domains, IGB (Ignimbrite) and BT2 (Breccia Transitional Revised). Limited additional testwork was completed on samples from these two sub-domains aimed at quantifying their lithological and/or surface oxidation-related characteristics to silver recovery.

Testwork was completed on all composite samples representing each domain separately in order to support flowsheet development and produce commercially traded products or intermediates. This included the option of recovery via various gravity methods.

Overall, the work identified alternatives to enhance lead recoveries and improve the gross revenue of product, however average silver recoveries remained at approximately 74%.

Pending review, further metallurgical test-work and flowsheet optimisation on the Paris Project has ceased. Core identified a number of additional processing options which may incrementally lift recoveries, however this test-work is not warranted at this time. There has been sufficient information generated to understand the key parameters of the Project's performance.

A number of North American silver specialist metallurgists are known to the Company. The findings of the final Core report will be peer reviewed with the objective of defining any future work that can improve the Project's performance at a time when silver economics improve.

The Maslins project is a high profile IOCG tar-get located on the Stuart Shelf (IVR ASX Re-lease: 24 July 2018). Magneto-Telluric surveys by Geoscience Australia and proprietary data compiled by Investigator (including gravity, magnetics and synthesis of regional drillhole data) defined a drill target considered by the Company to be realistically analogous to Olympic Dam.

Maslins has generated significant interest from several parties and discussions are in progress with the objective of having a partner enter a Farm-In/Joint Venture Arrangement to fund the proposed drilling program. Whilst later than preferred, the delay in concluding an agreement with an incoming partner has enabled other prospective parties to be canvassed.

As was announced on 16 August, Mr John Anderson stepped down from his role of Managing Director and CEO. At that same time, a number of roles within Investigator were made redundant. With the reduced focus on the Paris Silver Project and the strategy to limit expenditure on higher risk early stage exploration properties personnel numbers have been reduced from 8 to 3.

All expenditures are being critically reviewed to ensure conservation of current cash reserves.

A number of early stage tenements, which have an attendant high risk, have been identified as non-core and have either been relinquished or will not be renewed upon expiry.

ASX:ADN) over the tenement area to the West of the Peterlumbo (Paris Project) tenement package is considered to offer insufficient benefit to warrant further expenditure. Investigator has notified Andromeda of its intention to terminate the JV. The process to return Investigator's JV interest, without future liability, has commenced.

As was previously advised, the Board of Directors of Investigator Resources Limited have determined that the near-term focus of the Company shall be to acquire a high-profile advanced exploration project, without re-striction as to commodity or jurisdiction.

In addition to a number of projects that had been previously offered to Investigator, numerous other opportunities have been re-viewed over the past few months. This work has extended from simple desk-top reviews through to detailed investigative site visits and due diligence reviews. It is intuitively obvious that high value projects cannot necessarily identified and cheaply or easily acquired. They are in fact rare and the acquisition pro-cess is intensive. However, the Investigator Team is confident that the process will add value for Investigator shareholders in a timely manner.

This work is the current main focus of Investigator and updates will be provided on a regular basis.

Investigator Resources Limited (ASX:IVR) is a metals explorer with a focus on the opportunities for greenfields silver-lead, copper-gold and other metal discoveries in South Australia.

The Company has applied an innovative strategy that has developed multiple ideas and targets giving Investigator first-mover status. These include: the Paris silver discovery; recognition of other epithermal fields and the associated potential for porphyry copper-gold of Olympic Dam age; extending the ideas developed at Paris-Nankivel and using breakthrough government Magneto-Telluric surveying to rejuvenate targeting with the Maslins IOCG target as the next priority drill target.