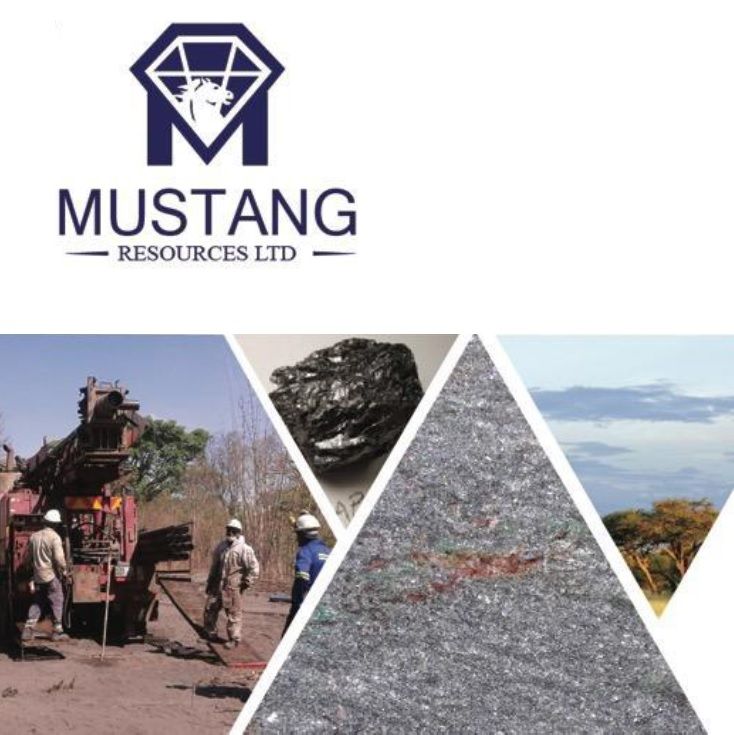 OTCMKTS:GGPLF) is pleased to announce that a strategic review led by new Managing Director Dr Bernard Olivier has found that the Company's Caula Graphite Project in Mozambique is well on track for first production by the middle of next year.

The review also established that Stage 1 of Caula will produce vanadium concentrate which can be either sold or stockpiled for further processing to high purity vanadium products as part of Stage 2.

The extensive review was conducted alongside the Concept Study, which is set for completion in the June 2018 quarter.

Dr Evan Kirby, who recently joined the Mustang Board of Directors as a Non- Executive Director and consultant and has significant graphite and vanadium experience, assisted Dr Olivier in the review.

The key findings of the review were:

- The vanadium content of the ore represents an additional cashflow opportunity, especially given the structural shift in the vanadium market.

- The most effective way to develop Caula involves a two-stage process:

o From the start of operations, vanadium will be extracted to a concentrate. This will be sold to a vanadium producer or stockpiled for future production of refined vanadium pentoxide chemicals (98% and 99%+ V2O5).

o The Stage 1 Graphite Plant is being designed to allow future incorporation of all processing equipment into the larger Stage 2 graphite plant.

o Sale of graphite and vanadium products produced in Stage 1 will be used to secure binding off-take agreements and associated finance required for Stage 2 development.

o Stage 1 of the project development is expected to be completed and producing sellable products in H1 2019.

The Caula Graphite Project represents a unique combination of both high grade and large flake size that distinguishes the project from its peers (see Figure 1 in link below). The Caula project has delivered a maiden JORC Inferred Resource of 5.4Mt at an average grade of 13% TGC (6% cut-off) for more than 700,000 tonnes of contained graphite. The exploration results included exceptionally high-grade intercepts of up to 26% TGC. (see Note 2 below)

In addition, initial metallurgical test work has confirmed Caula can yield high percentages of Super Jumbo, Jumbo and Large flakes (~55% from the fresh ore) with carbon content up to 98% through simple flotation (average of 97% C across all size fractions). (see Note 3 below) Oxidised ore has also demonstrated excellent treatment characteristics.

In addition to the exceptional quality of the products, Mustang has already proven that its experienced team in Mozambique can both build and operate a mining project. The recent conversion of exploration licences to mining concessions on the neighbouring ruby project is further testimony to Mustang's abilities to execute project delivery successfully in Mozambique. Furthermore, Mustang constructed and commissioned the current 200tph processing plant being utilised on the Montepuez Ruby Project that borders the Caula Graphite Project (see Figure 2 in link below). Mustang is able to utilise the infrastructure and operations camp of the ruby project to fast track the graphite project development.

As announced on 5 February 2018(see Note 4 below), the Company has completed the 1,400m diamond drilling campaign which will underpin the Concept Study of the Caula Graphite Project. The Concept Study remains on track for completion in Q2 this year. Approximately 1.2 tonnes of diamond drill core, comprising 51 samples from the current drilling program, have been delivered to Nagrom Laboratories in Perth for graphite and vanadium recovery test work. The samples, representing oxide and fresh ore, will be tested both as composites and as individual samples to investigate orebody variability. Multi-element analysis of the samples is being performed by SGS South Africa and full results are expected shortly.

Given the potential of both the graphite and vanadium component of the Caula ore, Mustang is developing a dual extraction flowsheet that will allow extraction of both graphite and vanadium from the feed ore. The two-stage development strategy also suits the team's operational skills and abilities as well as ensuring that binding off-take agreements can be secured to finance Stage 2 of the development plan which represents the vast majority of the development costs. Binding off-take agreements and associated project finance typically require considerable quantities of final graphite concentrates for product qualification and the Company considers that its staged development strategy will ensure delivery of cost-effective products within a very short timeframe. The Company estimates that, subject to the final results of the Concept study, it can fast track the Stage 1 development phase for completion and sellable product delivery in H1 2019.

Stage 1 consists of the establishment of a low-cost mining operation delivering approximately 100,000tpa of ore to a robust cost-effective processing plant capable of producing 10,000tpa to 15,000tpa of high-grade graphite concentrate. Notably, the required feed grade of 100,000tpa (~20 tonnes per hour) is considerably smaller than the Company's current 200tph processing plant located on the neighbouring ruby tenements.

Vanadium will be extracted to a concentrate from the inception of the project and the vanadium extraction process will be integrated into the Stage 1 plant. Vanadium concentrate will be sold to a vanadium chemicals producer or stockpiled for future production of refined vanadium chemicals (98% and 99%+ vanadium pentoxide products). The Stage 1 Graphite Plant is being designed to allow future incorporation of all processing equipment into the larger Stage 2 Graphite and Vanadium plant. Through the production of both graphite and vanadium concentrates, the Company is confident that it will be able to secure binding off-take agreements and associated finance required for Stage 2 development. Stage 1 of the project's development is expected to be completed and producing a sellable product in H1 2019.

Stage 2 comprises of the expansion of mining operations to between 300,000tpa and 600,000tpa of ore. Stage 2 is aimed at delivering a large full-scale processing plant capable of delivering 50,000 tpa to 75,000 tpa of high grade (97% C+) graphite concentrate as well as the integrated construction of a full-scale vanadium concentrate processing plant capable of producing refined vanadium chemicals for the fast growing high-tech markets (e.g. battery and aerospace markets).

Preliminary considerations indicate that the vanadium processing plant could potentially deliver between 1,200 to >2,000 tpa of V2O5 as high-purity products that will sell at significant premiums to ferro-vanadium or standard grade 98% vanadium pentoxide flake.

ASX:SYR). In July 2014, Syrah published the results of its vanadium scoping study.(see Note 5 below) The outcome of the study was very positive and most of the conclusions drawn have relevance to the Caula Graphite Project. The following points were noted:

- There was strong correlation between graphite and vanadium grades in the ore.

- Vanadium could be recovered to a concentrate by a combination of froth flotation and wet high intensity magnetic separation (WHIMS). These are well established processing methods commonly applied in the mining and minerals industry.

- A vanadium chemicals plant could be sourced from China where there is extensive experience with vanadium extraction from graphitic and carbonaceous ores.

Worldwide, the major use of vanadium is as an alloying agent in full alloy and high strength low alloy steels. China has recently increased the minimum specification for reinforcing steel used in buildings and as a result, domestic vanadium consumption is expected to increase by 10,000 tonnes per year (Metal Bulletin, August 2017). The vanadium market has already experienced a structural shift, changing China from being a net exporter of vanadium to becoming a net importer of vanadium. The use of vanadium in vanadium redox flow batteries (VRFB batteries), used for large scale energy storage is set to drive a further increase in demand. Consequently, vanadium supplies have tightened and the price of vanadium has increased sharply over the last two years to current levels of ~US$30,500/tonne, making it the best performing battery metal of 2017(see Note 6 below).