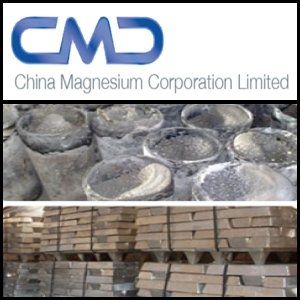 ASX:CMC) ("CMC" or "the Company") advises that it has issued a further 39,548,960 shares and 19,774,480 options (exercisable at $0.05 on or before 8 December 2017) pursuant to shortfall applications for its $2 million rights issue announced 28 October 2016. The shares and options were issued to underwriters and other investors, and are in addition to the issues of shares and options announced on 30 November 2016.

- Shortfall for CMC's recent rights issue has been oversubscribed by underwriters and other new investors.

- CMC in strong position to further its existing business and capitalise on other opportunities.

Directors have now subscribed for a total of $730,000; and substantial shareholders Mr Wang Feng (on behalf of Shanxi Pingyao Fengyan Coal & Coke Group Company Limited) and Mr Jia Guicheng followed their rights, subscribing for a total of $373,000.

The Company also welcomes to its share register 6 new Chinese strategic investors, who contributed a total of $857,000 in shortfall subscriptions, and includes Mr Wu Jiepeng, who is now a substantial shareholder of the Company.

The primary purpose of the issue is to provide the Company with additional general working capital and flexibility to further its existing Australian and Chinese operations and, if thought fit, to put it in a stronger position to build capacity and acquire assets in industries which leverage the Company's strengths and advantages.

"We all recognize CMC's strengths and advantages in China and Australia, including our lithium project in the world-class Greenbushes area of Western Australia and our existing operations in China.

"CMC has recently added to its key strategic relationships in China, including organisations involved in lithium mining, processing, the manufacturing of lithium-ion batteries and energy storage.

"These relationships include our new Chinese investors, and because of the oversubscribed rights issue we are now in much stronger position to take advantage of any synergistic or value-adding opportunities as they present themselves," said Mr Blackhurst.

The shares and options exceeding the rights issue shortfall (4,670,827 shares and 2,335,432 options; $116,771 in excess subscriptions) have been issued to non-related parties out of the Company's 15% placement capacity under ASX listing rule 7.1. An appendix 3B quotation application for these excess shares and options accompanies this announcement.

The issued capital of the Company following allotment is as follows:
To view the release, please visit:
http://abnnewswire.net/lnk/8J8N26P3