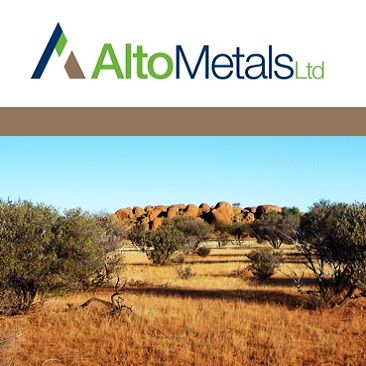 ASX:AME) Directors present their report on Alto Metals Limited ("Alto" or "Company") and its controlled entities ("Group") for the financial year ended 30 June 2016.

The principal activities of the Group during the financial period were the exploration of a number of gold and uranium tenements in Western Australia.

Significant Changes in State of Affairs

During the year, the Group acquired a 100% interest in Sandstone Exploration Pty Ltd, the owner of the Sandstone gold project for a cash consideration of $500,000, the issue of 19,000,000 fully paid ordinary shares and 25,000,000 Performance Shares subject to the Group achieving a resource of 500,000 ounces of gold. As a consequence of this purchase, the Company has refocused its activities on the gold sector, and changed its name from Enterprise Uranium Limited to Alto Metals Limited.

The Company raised $1.1 million in additional funds through a placement in June 2016, to sophisticated investors and a further $1.7m through a share purchase plan which was completed post balance date on 25 July 2016. The Company will continue to keep its Uranium tenements in good standing and undertake minimal exploration while the Uranium price continues at its low price point.

Exploration activities will be increased significantly in the next financial reporting period as drilling commences at the Sandstone Gold project to increase the current resource base.

No dividend has been recommended.

At the start of the year, the Company held granted tenements and tenement applications over six project areas prospective for sand hosted "in situ recovery" style (ISR) and calcrete hosted uranium deposits in Western Australia. With the continuing low uranium price, the Company commenced the search for an advanced gold project in Western Australia, and reviewed a number of opportunities.

In late 2015, the Sandstone Gold Project was identified as an excellent exploration opportunity for the Company, and following a period of due diligence, a purchase agreement was signed with the vendors on 29 March 2016. The Group's corporate objective for this acquisition is the discovery of a mineral resource of at least one million ounces of gold, which would lead to the development of a mining operation.

The future of the Group's uranium landholdings is currently under review in light of the acquisition of the Sandstone Gold Project. The Company's core uranium projects have been retained under title pending the outcome of this review.

On 23 March 2016, Alto Metals Ltd announced that it had entered into a share sale and purchase agreement to acquire all of the issued capital of Sandstone Exploration Pty Ltd (Sandstone). Sandstone's only asset, the Sandstone Gold Project, is located approximately 600km northeast of Perth in the East Murchison Mineral Field in Western Australia and is centred on the small township of Sandstone.

ASX:TRY) Sandstone Gold Operations, which was highly profitable up until the cessation of mining in late 2007.

Alto's first priority at Sandstone is to delineate relatively shallow oxide gold mineralisation that can be economically mined and trucked to one of several gold treatment facilities in the region. To support this work Alto is undertaking a variety of broader exploration initiatives comprising acquisition of high-resolution airborne magnetic and radiometric data, litho-structural interpretation and targeting, Induced Polarisation surveying where appropriate (to detect large deep sulphide systems) and aircore drilling and RC drilling. The second priority is to delineate deeper and more extensive high-grade sulphide-hosted gold mineralisation using RC and diamond drilling.

- Upon execution of the Agreement, Alto was to pay the two individual Vendors of Sandstone a non-refundable amount of $100,000.

- Upon completion, Alto was to pay to the Vendors $400,000 cash, issue 19 million Alto fully paid ordinary shares, and issue 25 million performance shares, converting on a one-for-one basis into Alto fully paid ordinary shares upon Alto confirming total combined Inferred and / or Indicated Mineral Resources and / or Ore Reserves of at least 500,000oz gold (or equivalent for other minerals or metals) in aggregate, on one or more of the Tenements.

- Completion of the acquisition of Sandstone ("Completion") was subject to:

(a) Alto completing due diligence enquiries to its satisfaction within 10 business days of execution of the Agreement;

(b) Alto obtaining by 31 May 2016 shareholder approval under Listing Rule 7 and ASX approval of the terms of the 25 million Performance Shares to be issued by way of contingent deferred consideration; and

(c) grant of all of the Tenement applications by 31 December 2016 (Alto may waive this condition).

- Upon completion, the Vendors had the right to nominate one Non-Executive Director to the Board of Alto;

- Upon completion Sandstone would grant the Vendors a 2% gross revenue royalty on all minerals produced from the Tenements and the right to fossick down to 2m below surface for all minerals and metals including gold nuggets;

- Alto agreed to incur a minimum $300,000 per annum on exploration expenditure on the Tenements in the first two years following completion; and

- Usual and appropriate warranties and covenants applied to the parties including pre-emptive rights upon surrender or sale of the Tenements by Sandstone.

A general meeting of Alto shareholders on 20 May 2016 approved the issue of the Shares and the Performance Shares to the Vendors, and agreed to change the name of the company from Enterprise Uranium Ltd to Alto Metals Ltd. The Company received a new Certificate of Registration for Alto Metals Limited from the Australian Securities and Investments Commission on 23 May 2016.

On 23 June 2016, Alto announced that it had completed early the acquisition of the Sandstone Gold Project and experienced explorer, geologist and mining executive Mr Stephen Stone had joined the Alto board.

Under the Sandstone Sale and Purchase Agreement, Alto paid the vendors a deposit of $100,000, and was required to pay a further $400,000 and issue 19 million fully paid Alto shares to the vendors upon grant of the Exploration Licences and Prospecting Licences comprising the project. Following the successful negotiation of a heritage agreement with the holders of Native Title in the Sandstone area, and the removal of an objection to the grant of tenements, the Company waived the condition of tenement grant before completion, to bring forward the acquisition of Sandstone Exploration Pty Ltd.

The Company issued 19 million fully paid Alto shares to the vendors, and a sum of $200,000 cash, to complete the acquisition. A further payment of $200,000 cash will be made upon the grant of the tenements, which has subsequently occurred on 23 September 2016.

CUE GOLD AND BASE METALS PROJECT

On 21 December 2015, the Company entered into an Option Agreement with AM-Australian Minerals Exploration Pty Ltd (AAM) over the Cue Project in Western Australia which consists of five Exploration Licence applications [20/888, 20/889, 20/890, 20/891 and 20/892] held in the name of Cue Metals Pty Ltd. The tenement applications lie along strike to the north of the former Big Bell and Cuddingwarra gold mines and are considered prospective for gold and copper/zinc base metals deposits.

AAM has granted Alto an option to purchase a 90% interest[*] in the Tenements if and when they are granted during a 12 month period commencing on 21 December 2015 for a consideration of a non-refundable "Option Fee" of $50,000. The option may be exercised at any time if grant of one or more of the Tenements has not yet occurred during the option period, and only in respect of all of the Applications and/or Tenements. If Alto exercises the option then Alto will pay to AAM $50,000 cash at completion and issue to AAM fully paid ordinary shares in Alto to the value of $50,000 at a deemed issue price which equates to the volume weighted average price of Alto shares traded over the last 5 Business Days on which Alto shares traded.

Alto is currently conducting due diligence on the project.

[*] AAM's 10% interest will be free carried by Alto to completion of the first bankable feasibility study and decision to mine, and thereafter AAM will contribute 10% of the future exploration and mining joint venture costs.

During the earlier half of the past year, the Company refined its portfolio of uranium projects by the addition of several new tenements and projects with high uranium prospectivity, and reduced its granted landholdings by the surrender of non-core tenements. In light of the acquisition of the Sandstone Gold Project, the future of Alto's uranium landholdings is currently under review.

ASX:EMX). Alto's interest in this company stemmed from Energia's advanced Carley Bore uranium project in the Carnarvon Basin of Western Australia. Following Energia's change in focus to pursue zinc in Italy in early 2015, Alto began a gradual divestment of its Energia shareholdings. On 12 August 2015, Alto sold on market its remaining 8.5 million EMX shares for a net consideration of $422,974, realising a profit of $550,898 over the three year period.

In May 2016 Alto raised $1.141 million from a share placement of 19,339,158 fully paid ordinary shares at 5.9 cents per share to professional and sophisticated investors as defined under Section 708 of the Corporations Act (2001). The issue price of 5.9 cents per share represented a 22% discount to the 15 day traded VWAP. These funds will be used to initiate gold exploration at Sandstone and for working capital.

ASX:AZY) that it had held for over 12 months on the basis of Antipa's attractive Minyari and Calibre gold/copper projects in the Paterson Province of Western Australia.

On 16 June 2016, Alto announced a proposed Shareholder Purchase Plan (SPP) to raise $1.7 million at an issue price of 5.9 cents per share representing a discount of 18% to the volume weighted average price of Alto fully paid ordinary shares calculated over the last 5 days on which sales in Shares were recorded before the SPP was announced. The SPP closed fully subscribed and the Company received valid applications from eligible shareholders for 28,745,705 new shares, thereby raising $1,703,000. The new Alto shares issued pursuant to the SPP began trading on the ASX on 26 July 2016. 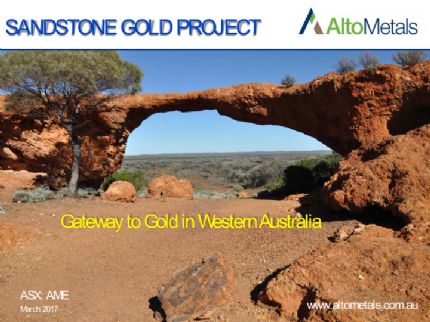