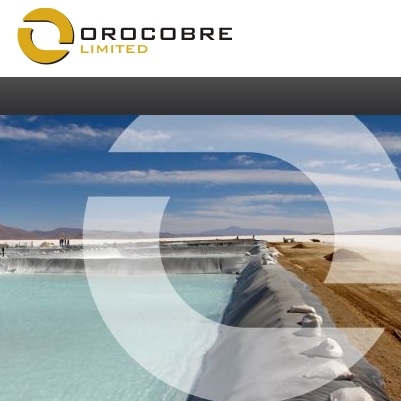 TSE:ORL) has released a webcast with the following details:

Orocobre CEO, Richard Seville, discusses the Company, ramp up, the lithium market and the importance of lithium, customers and immediate and future objectives.

Mr Seville was appointed a Director in April 2007. Mr Seville is a mining geologist and geotechnical engineer with over 30 years' minerals sector experience covering exploration, mine development and mine operations. He has had significant corporate experience, having had many years in the role of Operations Director and/or CEO in ASX/AIM listed mining companies. Mr Seville is a graduate of the Royal School of Mines, Imperial College and James Cook University North Queensland.

TSE:ORL) (OTCMKTS:OROCF), and is building a substantial Argentine based industrial chemicals company through its portfolio of lithium, potash and boron assets. In partnership with Toyota Tsusho Corporation (TTC) and JEMSE, Orocobre has built and is now operating the world's first commercial, brine-based lithium operation constructed in approximately 20 years.

In 2018 Orocobre announced the Stage 2 Expansion of its flagship Olaroz Lithium Facility in Argentina. The Stage 2 Expansion will add 25,000 tpa of lithium carbonate production capacity, taking full production and capacity to 42,500 tpa of lithium carbonate for sale to industrial, technical and battery markets, positioning Orocobre as one of the world's largest and lowest cost lithium chemicals producers.

Additionally, Orocobre and Toyota Tsusho Corporation have commenced construction of the 10,000 tpa lithium hydroxide plant in Naraha, Japan. The construction of the Naraha Lithium Hydroxide Plant will further cement Orocobre's position as a global lithium chemicals producer operating at the bottom quartile of the lithium cost curve. This new hydroxide plant will be the first of its kind in Japan and will provide Orocobre product diversification suitable for different battery technologies and the potential for significant margin growth on our primary lithium carbonate being converted to battery grade lithium hydroxide.