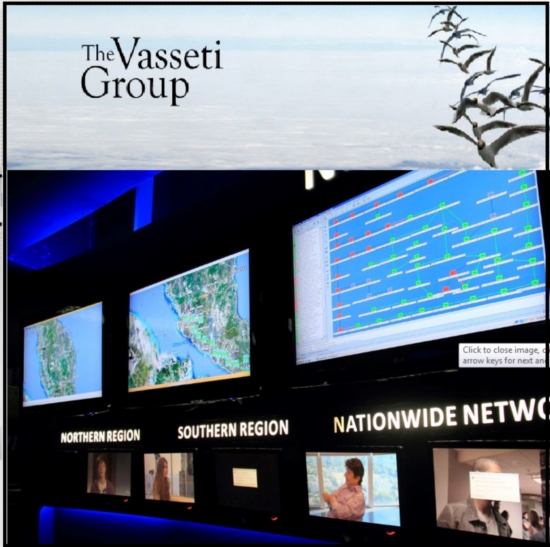 FRA:1VS) through its Thailand telco unit, is now testing its network infrastructure in several data centres within Bangkok as the phase one of V Telecoms' Bangkok Metro Core Network implementation. In addition, Vasseti will be connecting this core network to its global network hub in Hatyai as well as it Malaysian network in Padang Besar and Bukit Kayu Hitam at the Thailand-Malaysian border.

"We will have Bangkok and Hatyai connected to Kuala Lumpur and Singapore on a next generation optical transmission network that is developed in collaboration with our sister companies in Malaysia and Singapore. Upon commissioning of this high capacity network, we shall commence our offer for wholesale internet services (IP Transit)to various tier-2 internet service providers in Thailand as well as international leased circuits (IPLC) to other tier-1 telcos in Thailand", said Mr Ekarat Charoenphong, CEO of V Telecoms Connexia Co., Ltd. (Thailand). He added, "We also plan to offer premium retail/enterprise services to mainly large corporations as well as multi-national corporations based in Bangkok and other major towns/cities in Thailand".

According to the President and MD of Vasseti, Mr Ranjeet Singh Sidhu, through a telephone interview, the fibre optic infrastructure is being deployed in collaboration with some local players in Thailand to reduce time-to-market its products. He added, "We want to reach the market by next month so that we can capture the rapid growth in capacity demands that ISPs in Thailand is experiencing now. Our aim has always been to deliver best experience to the end users and we believe by having smart collaborations as the ones we developed in Thailand, will enable us to achieve our objectives sooner".

"As I have always said, Vasseti is committed to realise its dream to implement a regional network which will cover some of the most underserved areas in the world, which happen to be between three of the world's most promising economies i.e. China, India and Indonesia" added Mr Ranjeet.

While Vasseti is planning to bring these exciting developments to Thailand, it does not see itself as competing with the existing local players. According to Mr Ranjeet, "We are here to complement the fast growing domestic market. We believe with our presence, we will enable greater service quality and faster service delivery to the end customers. But we remain committed to work with any or all the existing players as we believe the market is big for now and will soon to grow even larger."

At the time of writing this press release, Vasseti has confirmed that it will be meeting various telcos and ISPs at a global telecommunication event called "Carriers World Asia 2013" scheduled next week from 27th and 28th March 2013 at Dusit Thani Hotel Bangkok.

Vasseti (UK) Plc ("Vasseti") is a large, diversified conglomerate based in Kuala Lumpur. It is listed on the Frankfurt Stock Exchange ("FSE") trading under the Symbol 1VS:GR and is fully reporting on the FSE Entry Standard. It is an investment holding company with business interests in the field of network telecommunications, information technology and real estate. Vasseti consists of companies and businesses that were established from as long as fifteen years ago to several new, high growth business ventures it initiated recently. The Company has already built a successful base in Malaysia and now plans to channel its resources to replicate its business model in the neighbouring countries especially within the South Asia region linking Indonesia, China and India, and possibly expanding towards the Middle East and North Africa thereafter. The Company intends to connect all the population within the catchment or business footprint to a single virtual world that is interlaced with brick and mortar business of real estate development and construction works. It is envisaged that the product and services offered by the Company may be reachable by almost 50% of the world population by the year 2020. Its strategy is to penetrate each market through mergers and acquisitions (M&A) and eventually becoming the market leader in those emerging markets. This forms part of Vasseti's global expansion plan and having its presence in the most productive and profitable manner.

Link: In Final Stages To Complete Its First Phase Of Thailand Telecommunication Network