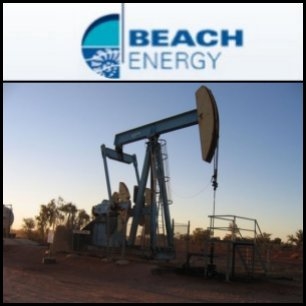 ASX:BPT) has been informed by Santos Limited (

Work in relation to the construction and tie-in of the new 15,000 barrels of oil per day ("bopd") trunkline (Beach 60% and operator, Senex (

ASX:SXY) 40%), between the Lycium Hub and Moomba, is well advanced. This trunkline will replace the Tantanna pipeline and is expected to be operational in Q4 2012.

ASX:DLS) 60%), due to the crude oil from these areas being transported to Moomba via haulage trucks. PRL 15 is producing approximately

ASX:COE) 25%) pipeline, that transports oil to the Tantanna facility, remains fully operational with current capacity of approximately 6,000 bopd (4,500 bopd net). It is anticipated that the maximum trucking rate of crude oil from PEL 92 will initially be around 2,200 bopd (1,700 bopd net). To minimise the impact of the Tantanna pipeline closure, Beach is sourcing more haulage trucks (expected to be available early Q3 2012) and moving to 24 hour operations to increase rates.