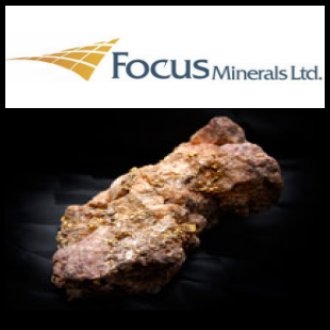 ASX:FML), a leading Australian gold producer and explorer, said today the March Quarter results show the takeover of Crescent Gold last year has transformed the business, more than doubling Group gold production and delivering on an improvement in operational efficiencies.

Focus acquired Crescent's Laverton operations, located in the eastern goldfields region of Western Australia, on 6 October 2011 for $59 million in scrip and $11 million in loans to Crescent to recapitalise its operations and deliver on a strategic plan to build new operating areas. The Crescent acquisition doubled Group resources to 4.3 million ounces and trebled reserves to 623,000oz.

In the March Quarter 2012, the Focus Group delivered 25,636oz of gold from Laverton at a cash operating cost of $1,216/oz, a 24% reduction since the September 2011 Quarter during which Focus took control. "When we acquired the Crescent operations, we believed that Laverton could be turned into a profitable and consistent producer," said Focus Minerals CEO Campbell Baird. "We have delivered on that in just six months.

"The addition of Laverton gives the Focus Group critical mass in terms of production with solid cash margins that enable us to generate solid cash flow, enabling us to pursue exploration and development opportunities with over 4.3Moz of resources spread across more than 1,600 sq km of tenements across our two operating hubs.

"The successful turnaround at Laverton is a great testament to the operational management and personnel on site, and we are now set up well to sustain these production levels moving forward."

At a Group level, Focus has produced 47,489oz1 of gold in the March Quarter and is on track to produce 175,000oz of gold this financial year.

During the March Quarter, the new Tindals Open Pit operations continued to perform strongly, with production 23% over budget for the Quarter, helping Focus to offset a 5,000oz shortfall to budget from its Tindals Underground.

"We experienced some geotechnical issues at the Countess ore body in the Tindals underground which led to a shortfall to budgeted production," said Mr Baird. "Positively we were able to offset this shortfall with strong production from the open pits, but in combination this saw a 12% reduction in mined grade for the Quarter impacting cash operating costs at Coolgardie for the period which were $1,274/oz."

Mr Baird said the consistent growth of the Tindals Open Pit operations had driven the decision to expand open pit production in Coolgardie with the commencement of mining from the Greenfields pit, adjacent to its Three Mile Hill processing plant planned for the September Quarter. Greenfields has an Ore Reserve of 1.1Mt @ 1.7g/t and the ability to deliver a significant lift in the production profile of the open pit operations.

"Greenfields is one of a number of robust projects we have in the Coolgardie field looking to compete for space in the mill," said Mr Baird.

To view the Focus Minerals Quarterly Report, please refer to the following link below:
http://media.abnnewswire.net/media/en/docs/ASX-FML-587530.pdf

Focus Minerals Limited (ASX:FML) is a leading Australian gold producer operating two significant production centres in Western Australia's Eastern Goldfields. The company is the largest landholder in the Coolgardie Gold Belt, 35km west of 'Super Pit' in Kalgoorlie, where it operates 3 mines: The Tindals Underground; Tindals Open Pits; and The Mount underground. Gold is processed at Focus' 1.2Mtpa processing plant, Three Mile Hill, which is adjacent to the town of Coolgardie. Focus also operates, through its 81.57% majority shareholding in Crescent Gold, the Laverton Gold Project, located 250km northeast of Kalgoorlie in Western Australia. Laverton comprises a significant portfolio of large scale open pit mines, with ore being processed under an OPA at the nearby Barrick Granny Smith mill. 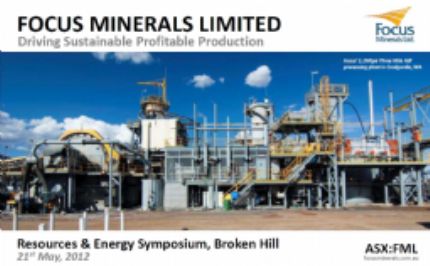