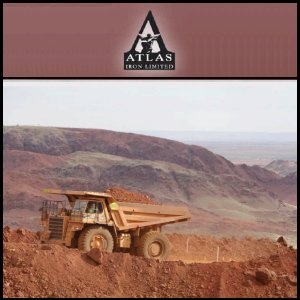 ASX:AGO) is pleased to provide its Quarterly Activity Report for the quarter ended 31 March 2012.

Highlights of the Quarter include;

- Consistent with guidance, 1.21 Mt (WMT) shipped during the March 2012 Quarter; impacted predominantly by Tropical Cyclones Heidi and Lua, and the unplanned breakdown of the Utah Point ship loading facility in January 2012

ASX:QRN) to progress the feasibility of an independent railway in WA?s Pilbara region

To view the complete Atlas Iron Quarterly Report, please refer to the following link below:
http://media.abnnewswire.net/media/en/docs/ASX-AGO-587030.pdf