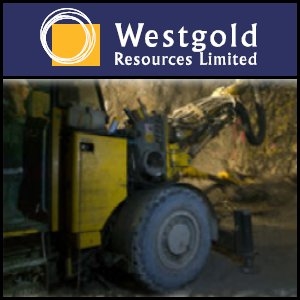 ASX:WGR) ("Westgold") is pleased to advise its recent drilling has intercepted a high-grade reef structure at the South Fingall Prospect in the Day Dawn Goldfield at its Central Murchison Gold Project (CMGP).

The area has previously been subject to wide-spaced shallow drilling, with a small open-pittable mineral resource of 65,000t @ 3.0 g/t Au defined. Westgold has reviewed the area with regard to the geological setting, structural interpretation and the proximity to the prolific Great Fingall and Golden Crown reef systems.

Westgold believes the area holds potential for additional narrow, moderately dipping quartz lode structures within the basalts in the footwall of the Great Fingall Dolerite unit. A focussed program of RC drilling was completed, with the following significant results returned:

The interpretation of the new and previous drilling from this area indicates a mineralised strike-length for the structure at South Fingall of circa 600 metres. The area now shows considerably more open pit potential and that a larger resource may be defined.

Importantly, the drilling has shown that there appears to be an increase in grade within the vein structure at depth which remains open. The results present real potential for additional high grade material which could be accessed in conjunction with the Company's development strategy for the re-start of underground mining at the Great Fingall and Golden Crown lodes. A depletion zone has historically been identified at the nearby Golden Crown reef being non-economic at surface, only reaching commercial grades below 100m vertical depth. Deeper drilling of the area is planned evaluate for depth extensions.

"This mineralisation is considered to be structurally related to the nearby Great Fingall Reef which has historically produced 1.2M ounces of gold at an average grade of 19.5 g/t Au and has been shown to continue to at least 1 kilometre in depth.

"We are excited by these early results which indicates both higher grade open pit potential, and points to additional significant high grade reef development in the area."

The Day Dawn Gold field is located approximately 25 kilometres east of the proposed site for the CMGP processing facility at Big Bell, and 1km from the Great Northern Highway, with haul road infrastructure already in place. Westgold's continued strategy is develop several open-pit and underground mines from the many sources in its overall 2 Million ounce Identified Mineral Resource base as feedstock for a new plant.

For the complete announcement including figures and Appendix, please refer to the following link:
http://media.abnnewswire.net/media/en/docs/ASX-WGR-565284.pdf