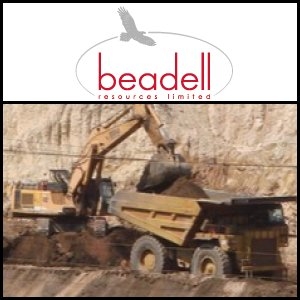 ASX:BDR) announced a maiden JORC iron ore resource of 209.1 million tonnes at 36.1% Fe from the Tap Norte Banded Iron Formation in Brazil. This includes Measured and Indicated resources of 75.4 Mt at 37.3% Fe. Potential extensions from Tap Sul and Tap Leste areas alone are estimated to contain an additional 120-180 Mt of iron ore which are currently being aggressively drilled. This maiden iron ore resource is the culmination of a major drilling and resampling program completed over the last 15 months.

ASX:GSE) have commenced a drilling program totalling 6,050m at Elaine Copper-REE-Cobalt-Gold Zone in Queensland to follow up significant intersections reported on 10th August. An Exploration Target of 40-45 million tonnes is defined as between 100m and 600m below surface. The Elaine mineralisation is open along strike and at depth. Drilling is designed to result in an inferred resource estimate early in 2012 and to grow dimension of previously announced results.

ASX:AQG) announced that its 95% owned Çöpler Gold Mine in Turkey has produced 100,000 ounce of gold on August 24, 2011. Achieving this milestone in only 35 weeks since its first pour on December 22, 2010 reflects a production ramp-up that is proceeding well ahead of plan. Initial plans at Çöpler are to produce approximately 1.42 million leachable ounces of gold with an average annual production of about 175,000 gold ounces. A detailed feasibility study is underway.

ASX:VRX) confirmed significant and continuous copper mineralisation from the second phase of drilling at the Thaduna/Green Dragon copper project in Western Australia. Undertaken during June/July 2011, the follow-up drilling program targeted identified copper mineralisation from the first phase of drilling in April 2011. The mineralisation is open along strike, down dip and to surface and Ventnor is planning an additional drill program with the intent to determine a maiden JORC compliant Resource for a scoping study to be completed in the March 2012 quarter.