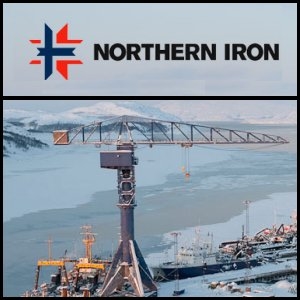 ASX:NFE) has signed a five-year contract with Tata Steel UK Limited, a division of Tata Steel (

ASX:MHL) have doubled the extent of the known mineralisation at Kashkasu II in the Kyrgyz Republic. High grade uranium intersections from the current phase 4 exploration drilling program returned grades up to 10m at 0.213% U3O8 and individual samples up to 0.25m at 1.5% U3O8. The fourth phase diamond drilling will continue this year to further test the mineralisation that is still open along strike and down dip.

ASX:ENT) has identified significant uranium anomalism on the margin of Lake Wooleen, and is planning reconnaissance mapping and geochemical sampling over the area. The company will also assess the gold and base metal potential over the central greenstone domain.

ASX:ZNC) has located two new zones of high grade manganese with assays up to 47.4% Mn at its 100% owned Earaheedy Project tenements. Haematite mineralisation, with rock chip values up to 64.2% Fe, was also discovered. Permitting is in progress for drilling of manganese and iron targets at Red Lake and of manganese targets at the Black and Blue Prospect.