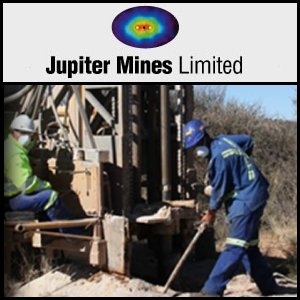 ASX:JMS) has commenced a Feasibility Study on the Mount Ida Magnetite Project in Western Australia. Mount Ida is a key part of Jupiter's strategy to become a global supplier of raw materials to the steel industry. The strategy is already well advanced, with construction of Jupiter's 49.9% owned Tshipi Manganese Project in South Africa commenced. The Mount Ida Feasibility Study will be based on annual production of 10 million tonnes of magnetite concentrate grading +68% Fe.

ASX:PNN) will commence an extensive drilling program this week at the Robinson Range Project in Western Australia. The drilling program is designed to investigate potential iron ore resources at the seven tenements within the Project. Rock chip results of up to 67.3% Fe were returned from previous surface samplings with all areas sampled returning some values in excess of 60% Fe.

ASX:ENR) reported high grade assay results from the BM1 prospect at the Yeneena project in Western Australia. The results included 10.1m at 6.8% copper, demonstrating the capacity to generate high grade, near surface copper mineralisation. A systematic program of RC drilling to a depth of 120m is currently in progress to further test the prospect.

ASX:RAW) has been informed by the operator Kea Petroleum Plc. (

LON:KEA) that the Hoadleys-1 exploration well in the Surat Basin spudded on the evening of June 25th 2011. Kea's gross median resource estimate for Hoadleys, in the event of success, at Precipice Sands level near 2000m depth, is around a million barrels of oil, with an upside potential several times larger than this.