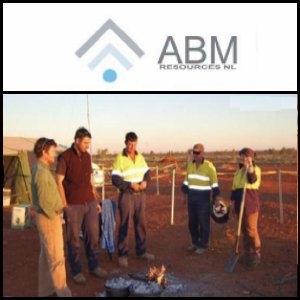 Darren Holden, Managing Director of ABM Resources said, "Drilling has had an excellent start and we are already ahead of our planned schedule with the first 10 holes complete and the first assay results expected shortly. The drilling is encountering expected rock-types, quartz veins, alteration and arsenic anomalism, and we remain encouraged about the targeting at the Western Zone where previous results returned 81 metres grading 2.03 g/t gold including higher grades such as 12 metres grading 8.22 g/t gold. At current rates of drilling we will certainly achieve our targeted 40,000 to 60,000 metres for the 2011 season."

The Twin Bonanza Gold Camp spans an area 40km by 40km and has over 30 targets identified to date. The Buccaneer Porphyry Gold Deposit, with an existing resource of 1.67Moz of gold, and the newly recognized higher grade Western Zone provide the first drill targets for 2011. ABM has contracted Top Drill Ltd of Kalgoorlie, Western Australia for the entire year with planned deep (up to 500m) Reverse Circulation (RC) drilling. A diamond core drill from Boart Longyear is scheduled to arrive on the property in mid May.

ABM geologists are currently mapping several areas on the Twin Bonanza Gold Camp Project. This work has identified two new targets with quartz veins observed at surface hosted in sediments. Sampling is underway on these prospects.

ABM has now sourced a third rig for regional work to cover targets such as the Kroda Gold Project and the Lake Mackay Iron Oxide Copper-Gold targets with work scheduled to commence in late May.

About the Twin Bonanza Gold Camp

ASX:NEM) multi-million ounce Callie Gold Mine. In 2010 ABM focused its effort at Twin Bonanza on the Old Pirate Prospect - a 3 kilometre anomaly with multiple high-grade zones in quartz veins hosted in sedimentary rocks and the Buccaneer Porphyry Gold Deposit - an intrusive related bulk tonnage gold deposit. In 2011 ABM is focusing its effort at the Buccaneer Porphyry Western Zone and other Buccaneer extensional targets, Old Pirate (trenching, bulk sampling and drilling) and intends to test up to 10 of the regional targets in the wider Twin Bonanza Gold Camp.

For the complete ABM Resources announcement including Summary Table of Holes Completed To Date, please refer to the following link:
http://www.abnnewswire.net/media/en/docs/540940.pdf