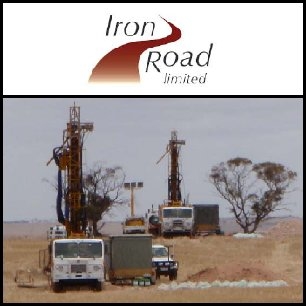 ASX:IRD) (Iron Road) is pleased to announce that Mr Jerry Ellis has been appointed to the Board of Iron Road as a Non-Executive Director. Mr Ellis has had a long and distinguished career in business, particularly in the resources sector and his experience will be invaluable as Iron Road progresses its flagship project at Central Eyre.

Mr Ellis' career included three decades at BHP Ltd, Chairing the company from 1997 to 1999. He also served on the boards of a number of listed companies and governing bodies including Newcrest Mining, Aurora Gold, the International Copper Association (ICA), Australia and New Zealand Banking Group (

PINK:ANZBY) (ANZ), the International Council on Metals and the Environment (ICME) and the American Mining Congress.

He is also a former Chancellor of Monash University, former President of the Minerals Council of Australia and former Chairman of the Australia-Japan Foundation and the Australian National Occupational Health & Safety Commission.

Mr Ellis is currently Chairman of Landcare Australia and MBD Energy Limited and is on the Advisory Board of Anglo Coal Australia.

Iron Road Chairman, Mr Julian Gosse, said that the Iron Road Board was very pleased to welcome such a high calibre individual to the Board.

"Jerry's outstanding resources sector credentials, coupled with his extensive background in public company oversight and governance is an outstanding fit for the Iron Road board," said Mr Gosse.

"Jerry's proven experience, particularly his in depth knowledge of steel mill input requirements gained during his time at BHP (

PINK:BHPLF), will greatly assist the Board as we enter the next exciting phase of Iron Road's project progression and seek to formalise early arrangements with off take and development partners.

"I expect Jerry's input and advice will be invaluable as we move past the pre feasibility stage at the Central Eyre Iron Project in early 2011 and towards project development," said Mr Gosse.

Mr Jerry Ellis said that he was looking forward to joining the Iron Road Board at a time of significant progress and transformation for the company, as strong steps are taken towards becoming a producer of iron ore.

"Iron Road is clearly about to enter a new phase of development, following the release of an expanded mineral resource estimate and completion of a prefeasibility study in early 2011. This will be an exciting time for the company as we seek to advance the Central Eyre Iron Project further along the development pathway. I look forward to contributing to the company during the period ahead and assisting in achieving our development goals," said Mr Ellis.

Iron Road Limited (ASX:IRD) is an Australia-based company. The Company is engaged in exploration and evaluation of its iron ore ground holdings. Its projects include the Central Eyre Iron project, Gawler Iron project and Windarling Iron project. The Central Eyre Iron Project consists of three distinct prospects: Warramboo, Kopi and Hambidge. The Company focuses on establishing a resource inventory that underpins a 5 to 10 metric tons per annum (Mtpa) magnetite export operation. It contains magnetite-bearing gneiss units with a cumulative strike length. Gawler Iron project includes over ten areas of known iron occurrences, including the Mt Christie deposit. A total of 252 in-situ rock chip and grab samples from 10 localities at the West Gawler project returned an average grade of 53.4% Fe. The Company developed a stage plan of ground work on Windarling project.