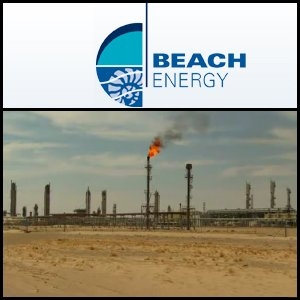 The Memorandum of Understanding between Beach and ITOCHU, relating to a proposed LNG facility, has progressed as a result of discussions with the South Australian Government and a recent visit to various locations in South Australia. It is intended that this facility would be supplied from Beach's extensive gas portfolio, which includes both conventional and unconventional gas resources.

Beach has over 1.4 TCF of gas resources booked in the Cooper Basin and Victoria and is currently pursuing an aggressive shale gas program in the Cooper Basin to identify further gas reserves. The first of the two planned exploratory shale gas wells, Encounter-1, has consistently realised high gas readings through the target Permian section and is now preparing to cut a second planned core in the Epsilon formation.

The proposed LNG facility and offloading terminal would have a capacity of 1 million tonnes per annum. A facility of this scale would require approximately 60 petajoules of gas per annum and depending on location specifics, capital expenditure of approximately $A1 billion. It is intended that the LNG from this facility would be exported into Far-East markets, including Japan.

Beach Managing Director, Reg Nelson, said "The Minister for Transport, Infrastructure and Energy, the Honourable Patrick Conlon, was able to meet with Beach and ITOCHU, and emphasized the importance to the State of South Australia of large scale infrastructure projects. South Australia appears to be an excellent choice for a future LNG facility, and such a project would generate significant employment for the state. We estimate it could be in the thousands during the development stage and in the hundreds during the ongoing operational phase. From a revenue perspective, we anticipate this project has the capacity to generate many billions of dollars should a long-term contract be executed. Importantly an opportunity such as this will further accelerate the next phase of the Cooper Basin as one of Australia's major sources of long-term gas supply".