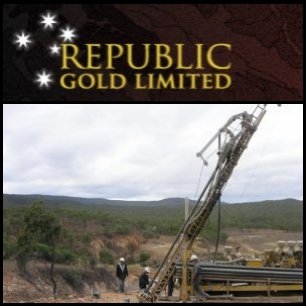 ASX:RAU) ("Republic" or "Company") are pleased to advise that the Company has successfully raised A$2 million through a placement of shares ("Placement") to institutional and sophisticated investors.

The A$2 million Placement will entail the issue of 200 million shares at a price of 1 cent per share. The Placement does not require shareholder approval.

Republic is also pleased to announce an SPP for registered holders of fully paid ordinary shares in the Company with an address as recorded in the Company's share register in Australia or New Zealand ("Eligible Shareholders").

Eligible Shareholders will be offered up to a maximum of A$15,000 of Republic shares at 1 cent per share.

Patersons will be underwriting A$4 million of the SPP.

Republic's Managing Director, John Kelly, said that the Placement was very strongly supported as the Company was able to secure A$4 million of underwriting for the SPP.

"Securing institutional support through the Placement is a major step forward for the Company and having the SPP underwritten for A$4 million is further evidence of the market's confidence in the Amayapampa Gold Project in Bolivia," Mr Kelly said.

"Republic shareholders will have the opportunity to buy shares at the same price offered to institutional and sophisticated investors and we expect strong interest in the SPP amongst our 5000 shareholders".

In accordance with the timetable set out in the ASX Listing Rules, the record date for the SPP is 13 September 2010 and all Eligible Shareholders at that date will be eligible to participate.

The SPP documentation is presently being finalised and full details will be released to the market and dispatched to all Eligible Shareholders.

The current placement and SPP fall within the Company's current funding capacity under the ASX Listing Rules. However, the underwritten amount will require shareholder approval.

A general meeting to ratify the placement and/or approve the issue of further shares is expected to be held late October and final details will be released shortly.

The Company's funding strategy for the Amayapampa Gold Project has now developed to the point where funding sources, amounts and timeframes are being determined.

The Company will raise A$6 million through the Placement and the SPP and these funds will be committed primarily to developing the Amayapampa Gold Project. This is Republic's flagship asset and the project has the potential to be the largest producing gold mine in Bolivia, with first production anticipated within 12 - 18 months. The Company announced the successful completion of the Bankable Feasibility Study for the project on 5 August 2010.

Republic will also be advising shareholders shortly of its medium and long-term funding programs, both of which have been advanced significantly over the past quarter in the North American equity markets and within the Bolivian project finance and bond market.