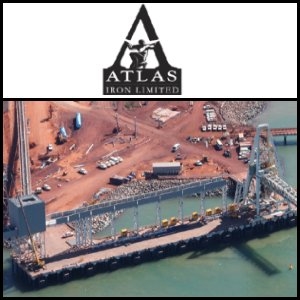 Mining during the quarter at Pardoo focussed on pit development and waste mining at the South Limb and Alice East as the site prepares for expanded production leading up to the end of the calendar year. Ore tonnes mined were subsequently down 27% on the March quarter.

Ore tonnes shipped during the June quarter were lower than the March quarter as a result of FMG advising Atlas Iron that it had insufficient port capacity to provide Atlas with access after the April shipment. As a result, Atlas gained access to the Port Hedland Port Authority, Berth 1.

The first Berth 1 shipment was scheduled to occur in late June but was delayed due to berth congestion. Atlas ultimately completed a 67,561 tonne (WMT) shipment through the Port Hedland Port Authority's Berth 1 facility on 19 July 2010. Revenue for this shipment is in the order of USD6.9 million, with a USD5 million dollar forward exchange contract entered during July at a rate of 82.98 cents to cover the majority of proceeds.

Subsequent to the end of the quarter FMG advised that it has capacity available for Atlas in the September quarter. Atlas will ship using Cape vessels (170,000 tonnes) through the FMG port in August and September until Utah is commissioned.

In June 2010 mining started at Atlas' Wodgina DSO Project, located 110 kilometres south of Port Hedland in the Pilbara of Western Australia (see Atlas announcements dated 30 April and 21 June 2010). With the commencement of mining at Wodgina and the scheduled delivery of the new multi-user port at Utah on 17 September, Atlas is on track to more than quadruple combined Pilbara iron ore exports to 6Mtpa rate by December 2010.

Wodgina will commence producing finished ore stockpiles in August with first ore haulage to the port in mid-September. Tonnes for export for the Utah Point commissioning will come from the significant stocks Atlas expects to have built in Port Hedland adjacent to the port facility.

This cargo was priced in early April at a price equivalent to that reported by major Pilbara producers with their non Chinese customers.

Since that time the pricing trend emerging is that major Pilbara producers are referencing index pricing for the preceding quarter when setting current quarter prices. Atlas is in discussions with customers as to the best means of pricing, with feedback to date indicating that a shorter reference period is their preference. Atlas continues to monitor market trends in this regard.

The demand for product from Atlas' customers remains strong as evidenced by continued interest from steel mills in entering into long-term off-take agreements. Further off-take contracts are expected to be entered into during the current quarter.

Following the commencement of mining at Wodgina in June 2010, Atlas is now on target to achieve iron ore exports at a combined rate of 6Mtpa from its Wodgina and Pardoo DSO mines in Western Australia by December 2010.

Atlas is in the process of completing a study on the Turner River Hub project. This is proposed to be Atlas' next expansion project, taking production from a rate of 6Mtpa to 12Mtpa from its northern Pilbara projects by the end of 2012. The Turner River Hub Project combines expanded production from the recently commissioned Wodgina mine, with expected new production from the proposed Abydos and Mt Webber mines through a centralised crushing and screening facility. The Pre Feasibility Study is now being concluded, with results including upgraded reserves to be announced in the September 2010 quarter.

Atlas will be shipping iron ore through Utah in Port Hedland at a rate of 6Mtpa later this year.

Construction of Utah continued during the period. At Atlas Iron's request, the Port Hedland Port Authority and project managers (Pinc Group) completed a review to determine how to fast track and ensure timely and cost effective delivery of Utah. The review established that the provision of additional construction personnel on site and engineering services was the optimal outcome.

Atlas has subsequently entered into an agreement to contribute additional funding in the order of A$8M to ensure the timely delivery of the facility on 17 September, and therefore give Atlas greater certainty in the continuity of port access leading to the end of the calendar year.

During the June quarter Atlas drilled a combined total of 554 holes, consisting of 31,441 metres of RC and 1,048 metres of diamond drilling across its Pilbara projects.

Exploration drilling was completed at the Wishbone Prospect at Warrawanda in May 2010, following on from earlier exploration conducted by Warwick Resources the previous year. 44 RC holes were drilled for 2,960 metres during the quarter.

In June 2010, an Inferred Mineral Resource of 20.8 million tonnes averaging 57.1% Fe was announced for Wishbone, reported at a 53% Fe lower cut-off. The mineralisation remains open to the northeast, and other similar geophysical targets within the Warrawanda Project area are yet to be drilled. These will be the subject of further exploration in the 2010/11 financial year.

On 16 June 2010, Atlas announced the discovery of the Hercules DSO prospect at its Wodgina DSO operation. Hercules, located three kilometres from the mine infrastructure, has now been drilled on an 80 metre by 80 metre first-pass grid pattern. Infill drilling on 40 metre lines has commenced. As at the end of June, the Company had completed 95 RC holes for a total of 8,186 metres. Exploration is continuing at Hercules, with infilling drilling to be completed in the September 2010 quarter ahead of resource estimation later in the year.

Development drilling continued at Pardoo for the June quarter, with 12,265 metres of RC drilling completed over the Emma and Olivia ore bodies. The programme is nearing completion with an updated resource estimate due later in the year.

Additional definition drilling is planned for the Chloe orebody in the current quarter, before the rig moves onto near-mine exploration around the Alice and South Limb pits.

Development work at Wodgina concentrated on infill drilling at the Dragon and Avro deposits prior to the commencement of mining at the Anson deposit. Holes beneath planned haul roads were drilled first, with a number of excellent intersections resulting from this drilling announced to the market on 16 June, 2010. During the quarter 73 RC holes were completed for 5,168 metres. An updated resource estimate for Dragon is currently underway, with Avro to follow shortly afterwards.

For further details and significant intersections from the Wodgina development and exploration drilling, please refer to the company's ASX announcements on 16 June and 6 July 2010.

During the quarter Atlas also completed 1,048 metres of diamond drilling at Mt Webber for metallurgical and geotechnical data at Ibanez, Gibson and Fender.

RC drilling resumed at Mt Webber in June 2010, infilling the existing 80 metres-spaced drill lines to 40 metre by 40 metre spacing. The infill programme has initially focused on the Ibanez deposit, with Gibson and Fender to follow. The aim of this drilling is to convert the majority of the resource to JORC Indicated category pursuant to completing ore reserve estimations as soon as possible.

A reserve estimate for the Mt Webber project is expected to be released by the end of August 2010.

Atlas completed a A$63.5 million capital raising in early May 2010 by a placement to international and domestic institutional shareholders. The Company issued 25.5 million shares at an issue price of A$2.49 per share. The proceeds of this placement enable Atlas to accumulate a significant ore stockpile in the lead-up to the start of exports from the Utah Point port facility in Port Hedland, allowing Atlas to maximise the number of shipments of iron ore in what is anticipated to be a period of strong iron ore prices.

PINK:AUOXF) (Aurox) announced their intention to merge by way of Scheme of Arrangement, with Aurox shareholders to receive one Atlas share for every three Aurox shares. During the quarter, Scheme documentation was completed and in early July 2010 was despatched to Aurox shareholders.

The Aurox Scheme meeting is scheduled for 6 August 2010. Subject to this approval, the merger is expected to be completed by the end of August 2010.

On 31 May 2010, Ms Tai Sook Yee was appointed as a non-executive Director. Ms Tai replaced Ms Jyn Sim Baker as IMC Group's (IMC) representative on the Atlas Board. Ms Tai is the Head of Group Strategies and Investments for IMC. In March 2007 she joined IMC, responsible for the Group's portfolio management. Prior to joining IMC, Ms Tai spent 25 years in senior roles in heavy building industry, governance and investments. Ms Tai is also a director of LinQ Capital Limited, the responsible entity of the LinQ Resources Fund.

Atlas Iron is a founding member of the North West Iron Ore Alliance (NWIOA), a group of independent iron ore companies progressing projects in the Pilbara of Western Australia. The NWIOA is advancing the development of its South West Creek port and stock handling facility, with pre feasibility works completed and work underway with Port Hedland Port Authority to formalise tenure.

Atlas continued to progress negotiations with a number of significant international entities regarding the purchase of equity in the Ridley project. While interest in the project remains strong the progress of negotiations has been impacted by the uncertainty caused by the Australian Federal Government's proposed RSPT taxation changes for the resources industry.

Post quarter end the Government announced the new MRRT which, while lacking detail, appears to have minimal impact on the total tax take of a large capital project cost project like Ridley. Atlas and others are lobbying for the total exclusion of magnetite from the MRRT to recognise that the compliance burden imposed does not justify the likely return to the government and that value is created on processing rather than extraction.

The clarification of the impact of the proposed tax on the project has enabled parties to recommence negotiations with greater confidence and considerable engagement has occurred with leading parties over recent weeks.

At the date of this report Atlas holds a 45.4% interest in Shaw River Resources Limited (Shaw) (