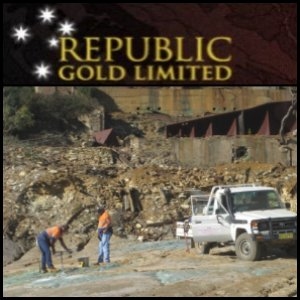 ASX:RAU) ("Republic" or "Company") are pleased to advise that as part of the Company's increased focus on getting the Amayapampa Gold Project into production, the Board of Directors is reviewing the Company's exploration and development portfolio in Australia.

As part of the review, the Board will consider options to farm-out or divest the Company's Australian properties (this includes the Tregoora/Northcote Gold Project resource areas and Burraga). This is in line with the Board's overall objective to focus on Amayapampa and free-up management and resources to ensure the company's flagship gold project - the 1.3m oz Amayapampa Gold Project (35.5mt @ 1.1 g/t with ~50% of resource at =1.9 g/t) - is brought into production.

The Board considers Hodgkinson Basin to be prospective for gold and anticipates a high level of interest from within the Australian and Queensland mining sector in this asset, as supported by the results of recent work completed at the project.

This project would account for a significant commitment of the Board and management's time as well as funding. In this context, the review of Australian Projects is likely to free up resources and contribute cash towards the Company's future exploration and development commitments on its more advanced and flagship projects.

- Petrological examination of samples from the Terrace Creek Prospect indicate why good metallurgical recoveries are encountered from high grade gold zones in the theoretically "refractory" zone below the base of oxidation.

Recent soil geochemical sampling has indicated two new hotspots at Tregoora by delineating the limits of gold anomalism at Tregoora's West Ridge and East Ridge prospects. The West Ridge anomaly extends over 700 metres along the Retina Fault, the major mineralizing structure in the region.

The East Ridge Anomaly extends over 500 metres on an apparent splay shear off the Retina Fault. The anomalies occur within silicified sediments of the Hodgkinson Formation and include many +100 parts per billion gold values. The central 300 metres of the West Ridge anomaly is up to 180 metres wide, due in part to down-slope dispersion. This new anomaly is supported by an envelope of interest outlined in 2008 over the greater Tregoora area by CSIRO and GSQ in a deformation and fluid-flow modelling project for which the Company was a major funder.

These new gold hot spots on East Ridge and West Ridge Prospects are centred some 2 kilometres to the north of the Company's high grade Terrace Creek Prospect. This zone has yielded a number of high grade shallow drill intercepts over the past two years, e.g. FN042 which had 24 metres @ 8.30 g/t Au from 2 metres. Both the East Ridge and West Ridge Prospects are now drill-ready. Further geochemical sampling and mapping will take place at the junction of the Retina Fault and East Ridge splay.

Metallurgical testwork of the Terrace Creek Prospect hotspot has shown good conventional gold recoveries extending below the base of oxidation and into the "refractory" zone.

Recent petrology and metallurgical testwork has provided evidence for the positive results. The petrology has provided a reason for the higher than expected recoveries from the conventional cyanide leach tests and has shown that there is free gold associated with the pyrite, either on the surface of the pyrite or within the pyrite crystals, although some gold is still refractory and is in solid solution in the arsenopyrite. It is believed that this has occurred because of the moderate arsenic concentrations at the Terrace Creek Prospect compared to the high arsenic levels at the Sleeping Giant Prospect. In the Terrace Creek system with high gold grades, insufficient arsenopyrite is formed to encapsulate the gold and hence discrete gold grains have formed in and around the pyrite crystals.

Similar to the low arsenic environment at Amayapampa, the higher gold grades lead to a greater proportion of the potential ore being amenable to conventional metallurgical techniques and therefore a more favourable economic scenario for the northern Tregoora prospects.

The Board of Directors anticipate reporting back to shareholders shortly on the outcome of its review of Tregoora.

For the complete Republic Gold announcement including figures, please refer to the following link: