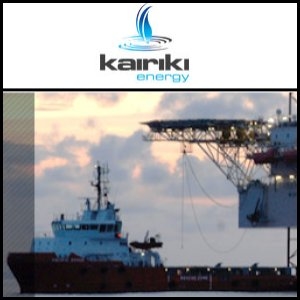 PINK:KAIRF) has been advised by Nido Petroleum Limited (

ASX:NDO) of the update on the Extended Well Testing (EWT) at Tindalo.

Well testing is continuing under the EWT agreement. As previously advised the EWT is for a period of 100 days of actual crude flow/production time or one million barrels of crude production, whichever occurs first.

The programme is designed to evaluate well performance and determine the long-term reservoir management plan for optimisation of reserves and value during the normal production phase beyond the EWT term. The following highlights can be confirmed to date:

- Approximately 75,000 barrels of oil have been produced from the well;

- Ongoing commissioning of the production processing equipment has required the well to be produced intermittently and at a restricted rate of approximately 6000 barrels of fluid per day;

- Water sample analysis has confirmed that the produced water is formation water.

The current well testing program is to startup the downhole pump (ESP) whilst finalising commissioning of the processing equipment. The well will be tested at several fluid rates and will be occasionally shut-in for data gathering purposes over the following days and weeks to evaluate the longer-term water cut development and well performance.

Nido will provide further updates to the market once the reservoir management plan has been finalised or when other material information becomes apparent.

For the complete Kairiki announcement including maps, please view the following link:

SC 54A measures 862 km2 and contains the Tindalo, Yakal, Nido 1X1 and Signal Head oil discoveries as well as a substantial portfolio of similar low-risk reefal prospects. In December 2009, Kairiki announced that the SC 54A Joint Venture had approved the development of the Tindalo field. The Tindalo development utilises a jack-up rig and a dynamically positioned storage vessel. Following a short project execution period, the Tindalo development tested oil at 18,689 bbls/d at the end of May 2010. Since that time, unexpected early water ingress to the well has resulted in the SC 54A Joint Venture preparing for a well re-entry and remediation programme to reduce or eliminate the water production. Based on a successful development at Tindalo a number of follow-up developments may be considered in SC 54A.

SC 54B measures 3184 km2 and contains the Gindara prospect which has a mean unrisked oil in place volume estimated by the Operator, of 634 million barrels. The Gindara prospect is a very large simple four-way closure at the Top Nido Limestone reservoir objective with an areal extent of 28 km2, a vertical closure of over 300m and is well located to receive hydrocarbon charge from the Palawan Trough. Kairiki is seeking to farm down its interest in SC 54B to accelerate drilling of the Gindara prospect. 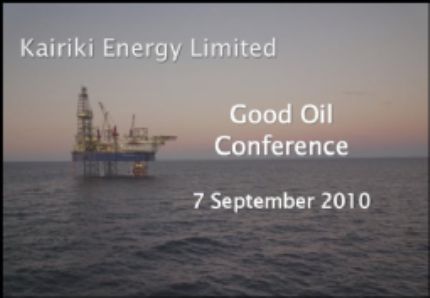